The creation of technology for generating stereoscopic video has earned an electronic engineering student at City University of Hong Kong (CityU) the first runner-up award in the Hong Kong round and the Gold Award in the finals of the 2010 Amway Pan-Pearl River Delta Region Universities IT Project Competition. 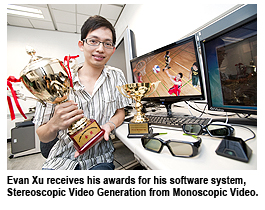 Users only need to wear a pair of 3D glasses to experience the stereoscopic effect, and the technology can be applied to most 2D movies, including classics from the past.

“It takes only one day to render a two-hour movie from monoscopic to stereoscopic video using my technology. Also, to make it more user-friendly, the interface of my system uses graphics for illustration,” Evan said.

Evan said he had no particular experience in imaging or video technology during his previous studies, from his foundation year to his second year as a major in information engineering. But he realised the tremendous potential of 3D movies when he began to work on his final-year project.

After discussions with his supervisor, Dr Po Lai-man, Associate Professor in the Department of Electronic Engineering, he decided to focus on this topic and completed his project after nine months of hard work.

“My PhD programme at CityU will start after summer,” he said. “With CityU’s advanced technical equipment, I hope to improve my technology by reducing the conversion time and enhancing the video quality to high definition.”

Evan said he was grateful to CityU for its support, particularly the advice on image processing provided by Dr Po, adding that his university education has helped him to develop independent thinking and analytical skills. “CityU not only teaches students theories from books, it also provides opportunities for us to apply our knowledge. With a solid foundation laid before us, we can meet future challenges,” he said.

Dr Po said Evan had succeeded against many other worthy contestants, adding that his success is a reflection of CityU’s excellence in teaching and research.