Tertiary students from institutions throughout mainland China, Taiwan, Hong Kong and Macau were treated to a series of talks on social and urban development in mainland China at a youth summit at City University of Hong Kong (CityU) on 4 August. 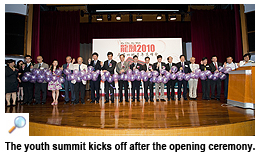 The main aim of the summit was to encourage young people to contribute to the development of Greater China, echoing the theme of urban development adopted at the recent Shanghai Expo. 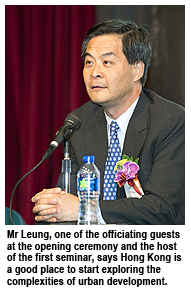 In his speech, Mr Leung related a story about Shenzhen Bay Bridge that he had overheard at another conference to illustrate how students should view their position within Greater China. Although the bridge is in southern China, Mr Leung said, it plays a pivotal role in the country’s traffic network. Thus, students should seize the opportunities arising from the development of China to “set higher aims with a long-term view,” he said.

Professor Kuo narrated a story in his talk that illustrated the importance of attitude to learning. He said that a certain professor at CityU had been deprived of a proper university education when he was younger because of historical events on the mainland. However, he was able to resume his academic studies at a later date and eventually achieve worldwide recognition as a scholar. 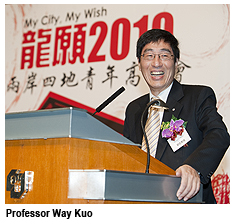 The aim of the story was to encourage students not to fall at the first hurdle and instead to pro-actively look for opportunities. He said university education is only one of the stages of learning and that the key to success rests with one’s attitude.

Professor Kuo ended his talk by delivering a Chinese couplet: “Family affairs, state affairs and world affairs all deserve our care; open challenges, internal challenges and all challenges shall not defeat our confidence.”

The seminars after the opening ceremony covered a range of topics, including the role citizens play in the urban development of Greater China, conflict between development and conservation, the impact of historical and traditional cultures on modern cities plus the need for “green cities” and a corruption-free society.

The summit is part of the “Dragon Wish—Cross-Straits Youth Exchange Programme 2010” held in both Hong Kong and Shanghai. The aim of this 13-day exchange programme is to enhance participants’ understanding of urban development in different cities across Greater China and to explore the role young people have to play in these socio-economic transformations. The summit also encourages participants to become more tolerant of others and to enhance their understanding of and sense of responsibility to mainland China.