What qualities make a great leader? How can we learn to lead? Recalling his experience with influential leaders, the President of the Legislative Council, the Hon Jasper Tsang Yok-sing, explored the qualities and virtues that a leader should possess in an inspiring talk at the 10th Anniversary Dinner of the Executive Master of Business Administration (EMBA) Association on 5 June. 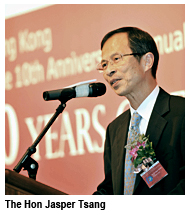 Mr Tsang argued in his discussion, titled “The Art of Leadership,” that leaders should have three key attributes. The first is that they should be articulate, though this was not necessarily the same as being eloquent. Rather, a leader must speak from the heart and be willing to listen.

In addition, leaders must be decisive, capable of making the right decision at the right time. “Leaders can’t guarantee they won’t ever get a decision wrong, but a successful leader is able to make others trust his decisions,” Mr Tsang said.

Mr Tsang said it was also paramount that leaders remain calm in times of crisis. His many years experience as a politician had taught him that crises can erupt at unexpected moments, even in times of relative stability, and that the only way to deal with such challenges is to respond in a controlled manner. 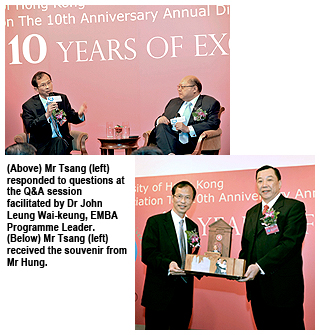 The Legco President also identified three virtues for a good leader. The first is to be fair, which encompasses more than simply the concept of equality. More expressly, it means the ability to work with people who hold contrasting opinions and the courage to appoint people who could be better than oneself.

The second virtue is to lead by example; and the third is never to take credit for any achievement nor blame others. “A leader who possesses these qualities and virtues will have an easier time winning the trust of his team,” Mr Tsang concluded.

Mr Tsang enlivened the question and answer session with wit and humour before the EMBA Association presented him with a gift to express its gratitude for the insightful talk. The gift was an affectionate model of Mr Tsang sitting in the President’s chair in the Legislative Council with a depiction on the front panel of him and his wife dancing. 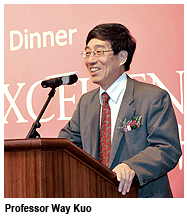 Mr Hung Ming-yung, Chairman of the EMBA Association, said in his welcoming speech that members of the Association are proud of being CityU students. Under the leadership of the President, he added, the University has recorded an excellent performance, citing the recent advance of three places to 15th in the 2010 QS Asian University Rankings. 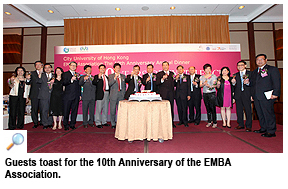 Professor Kuo in his address commended the excellent performance of the College of Business, and said the SWOT business model had been incorporated in CityU’s Strategic Plan 2010-2015. SWOT, which stands for the Strengths, Weaknesses, Opportunities and Threats facing an organisation, is not commonly employed in higher education institutions but Professor Kuo said it provided a driving force for CityU to move forward.

The CityU president added that the Hon Leung Chun-ying, CityU Council Chairman, had also made significant contributions to CityU’s development, and he encouraged alumni and students to continue to offer their support.

To celebrate its 10th anniversary, the EMBA Association later held a cake-cutting ceremony and a toast followed by a slide show on various student activities, learning programmes and graduation ceremonies.