Some 130 Executive Master of Business Administration (EMBA) alumni and students enjoyed a remarkable evening at the EMBA Association Annual Dinner 2009 on 9 May with the Hon Dr Leung Chun-ying, Council Chairman of City University of Hong Kong (CityU), and Professor Way Kuo, CityU President. 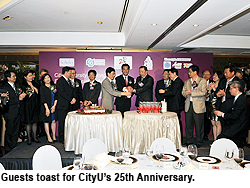 Legislative Councilor the Hon Mr Tam Yiu-chung, and Council member Mr David Fong Man-hung, were among the guests at the dinner.

In commemoration of CityU’s 25th Anniversary, the Chairman of the EMBA Association Mr Hung Ming-yung said CityU was entering a new development phase. As this year marked the beginning of a new era for CityU, he encouraged alumni to continuously support the University and make contributions to the community. 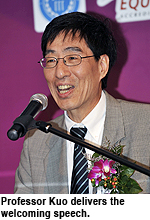 In his welcoming speech, Professor Kuo said, “With full support to CityU from all of you, and under the leadership of the Council Chairman, we’re sure we will make every member of the alumni, graduates and students proud of the University.”

“To excel in professional education is like running a marathon. It is important to reach the end. CityU will never give up,” Professor Kuo said. He then expressed his admiration of EMBA graduates for their impressive contribution to the economy of Hong Kong, the mainland and globally over the years and added, “Most importantly, you are the role models for the younger generation who would become society leaders in the future.” 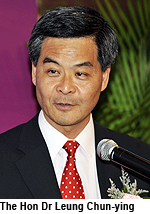 In introducing the guest of honour, Professor Wei Kwok-kee, Dean of the College of Business, described Dr Leung as a well-known figure for his many contributions to the Hong Kong society and the nation, among them his extensive involvement in the establishment of Hong Kong as a special administrative region.

Dr Leung said he was happy to join CityU and the topic of his speech, “The Hong Kong Economy beyond the Horizon - We can do Better”, was relevant to the theme of the University’s 25th Anniversary.

In his speech, Dr Leung outlined the many changes occurring on the mainland and around the world that would impact Hong Kong. These included the changing economic order of the world, the Central Government’s policy to deepen reform and to designate Shanghai as China’s financial centre, and the promulgation of the Pearl River Delta Reform and Development Policy Framework, in addition to changing cross-strait relations. 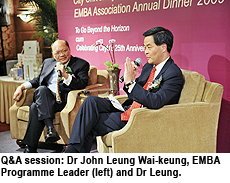 He added Hong Kong was faced with a number of constraints, among them the size of our land, the boundary that restricts flow of labour and capital, and the positive non-intervention policy of the Government in economic development. These were the issues that Hong Kong will have to address as there is a need to provide opportunities and hope for the new generation, and to pull up the bottom 30% of the workforce, or at least arrest the slide, he said.

Dr Leung pointed out that the main partner of Hong Kong’s economic development is the mainland, or more specifically, the Pearl River Delta. He went on to offer a series of measures to capitalise on future opportunities, including partnership between the Government, businesses and researchers.

“Opinions are useful but they only form the necessary starting points. Opinions have to be developed into policies and action plans through research. This is an area in which universities can do more,” he said. 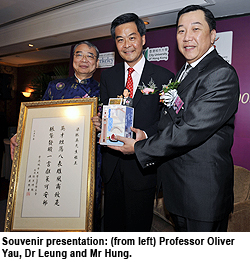 In concluding, Dr Leung congratulated on CityU for having 25 years of glorious history. “I have a lot to look forward to as well as everyone associated with the University because we are a great team. CityU has a lot of potential to explore and exploit,” he said.

He also urged Hong Kong people to stick together and grab opportunities with both hands and turn them into realities for the next generation.

In response to a question raised by a guest, Dr Leung admitted he did some “heavy lifting” for CityU to the extent that he spends five as much time and energy as in his previous Council chairman post.

Dr Leung’s speech has won the applause of the audience and, to thank him for his insightful speech, the Association presented him a figure set made in his shape, and a couplet composed by Professor (Chair) Oliver Yau Hon-ming, from the Department of Marketing. The couplet refers that Dr Leung’s words are crucial and his strategic and critical suggestions are valuable for the betterment of Hong Kong. 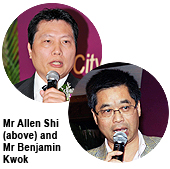 A cake-cutting ceremony and a toast were proposed by the guests for the 25th anniversary of CityU. Two EMBA alumni, Mr Allen Shi Lap-tak and Mr Benjamin Kwok Chan-yiu, also shared their experience on how their learning at CityU had helped them build a network valuable to their businesses, and improved their management.