To apply what we’ve learnt for more than two years at City University of Hong Kong (CityU) to real-life workplace situations, the six of us final-year students of Business formed a team and entered a competition held by CosmoGIRL! magazine in October 2009. Titled “Project CG! 2010 University Student Real-life Business Contest,” the competition ran for five months. After all the strenuous efforts over the months, we are happy to bring home the Overall Championship. 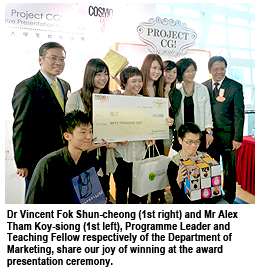 PROJECT CG! tests the participants’ integrated abilities and skills - business sense, creativity, design, writing, imagination, organisation, and project management. Throughout the months, we were assigned with tasks in fashion, retailing or publishing industries, working closely with a store or company in each particular field. Unlike other competitions, Project CG! emphasised real-life experience, and all the five tasks were real and tough projects. Contestants needed not only to exert their creative mind, but also put their ideas into actual work to fulfill the tasks within limited budget and specified time frames. It’s definitely more than competing in a game.

We named our team the “Rubik’s Cube” (or “Twisted Cube” as they are called in Cantonese). The cube’s six different-coloured surfaces precisely represent the six of us. We are different in our personalities and strengths, but we share one single goal - perfect performance in each round of the competition. Although majoring in Marketing and China Business, we couldn’t afford to take the tasks lightly. As products and brands vary from one collaborating store or company to another, different promotional plans were demanded of 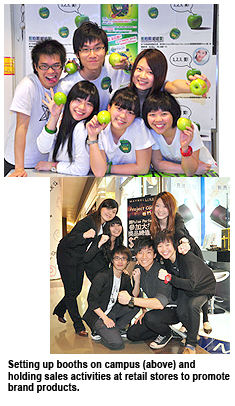 us. Besides, time allowed for preparations was short while we were still occupied with heavy loads of studies, which made the contest tasks all the tougher, much beyond outsiders’ imagination. Yet, for graduating students as we are, about to join the workforce, it was an unforgettable experience. Although the tasks got tougher as time passed, we worked increasingly harder in order to come up with a winning idea. We often had meetings until mid-night when lights were out for the day on campus. Working overnight and during holidays became a routine. But then, after all, wasn’t that just a rehearsal for our future work in real life?

At the beginning, many of our friends believed we should focus on our final-year project and get ready to find jobs as we would soon graduate. Also, our parents kept asking, “Meetings again tonight? Are you coming home for supper?” But as they learned more about the competition, they began to care about our progress and cheered us up. In the last two rounds of the competition, when we set our booths on campus, many staff and fellow students came to us with encouragement, wishing us success in bringing honour to CityU.

Finally, without letting our well-wishers down, we garnered six of the seven awards, including the Award of Excellence and the Best Web Blogger Award. We won the Overall Championship, too.

Here we would like to express our sincere gratitude to the College of Business for the training it has given us, especially for the practice-oriented final-year project that sharpened our skills, which helped to turn our ideas into solutions that satisfied our clients and jurors.