President’s talk on convergence of talents

“It’s hard to be an all-time winner. To maintain Hong Kong’s uniqueness and competitiveness, we must invest in scientific research and encourage creativity,” said Professor Way Kuo, President of City University of Hong Kong (CityU), at a forum organised by the Hong Kong Federation of Youth Groups on 11 May. In his talk titled “Convergence of Talents” for the Young Leadership Workshop 2010, Professor Kuo explained to over 300 secondary and tertiary students the importance of creativity and research for nurturing future talents of Hong Kong. 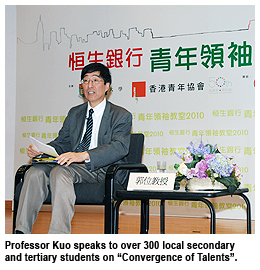 Professor Kuo started to discuss the prevailing trend of the world’s development by reviewing the history of China. He highlighted the humiliation experienced by China after the Opium War, the reform and development after the founding of the People’s Republic of China, and, recently, the frequent interactions between Hong Kong, Taiwan and the Mainland.

“Currently, we are witnessing steady advancement on the Mainland, frequent contacts between the two sides of the Taiwan Strait, and even a change of view of the US on China. Hong Kong has been enjoying all the advantages with its geographical location and unique strategic position over the past century. However, there is no free ride in the world. Without constant effort for innovation, we won’t be able to maintain our advantages,” he said.

Professor Kuo continued to illustrate his points by using the examples of Toyota and AT&T. Once the US telecommunication giant, AT&T was the leader of the industry, with the star-studded Bell Laboratories, staffed by many Nobel laureates and distinguished experts, serving as its product research and development team. On the other hand, Toyota also won high acclaim from the world’s consumers in the past. However, both of them have lost much of their momentum in recent years. “In this quality-oriented era, we must strive for innovation and advancement for high quality products to maintain our competitiveness and marketability. Otherwise, a decline is foreseeable as in the case of the kingdom as strong as the Qing Dynasty or a city as flourishing as Florence in the 15th century,” said Professor Kuo. 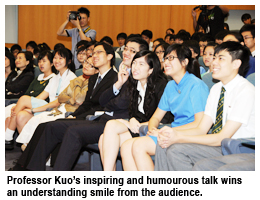 Professor Kuo further pointed out the major differences in culture and education system between Hong Kong and overseas countries. For example, the US encourages innovation and so promotes inventions. Conversely, due to long semester, the requirement for more credits and heavy study load in Hong Kong’s schools, the local education system emphasises book knowledge rather than creative thinking. Professor Kuo thus encouraged students attending the forum to digest and review their learning, explore and study other academic disciplines, and make more friends. Only when they fully master the basic essential knowledge and become professionally competent will they become the professionals needed for the future development of society.

The Young Leadership Workshop 2010 is jointly organised by the Hong Kong Federation of Youth Groups and The University of Hong Kong, with sponsorship from Hang Seng Bank. The ten lectures that run for four months between April and July 2010 will have experts and distinguished speakers from various fields to talk to students. Through the speakers’ vision and wisdom as well as their deep understanding of Hong Kong’s development, the Workshop aims at helping young people to understand Hong Kong today and encourage them to look for future development to sustain the advancement of Hong Kong. Other speakers include Professor Edward Chen Kwan-yiu, Professor Yuen Kwok-yung, the Hon Mrs Laura Cha and Dr Rita Fan Hsu Lai-tai.