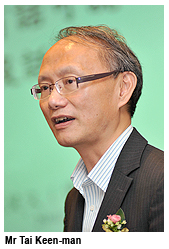 “In this information era, the mass media has become part of our life. There’s no way for us to get away from it but to face it, whether you like it or not,” said Mr Tai Keen-man, Assistant Director of Broadcasting (Radio) at Radio Television Hong Kong (RTHK).

A veteran media practitioner, Mr Tai gave the second talk in a public affairs lecture series on 29 April at the invitation of the Communications and Public Relations Office of City University of Hong Kong (CityU). His talk was entitled “I have something to say; I have nothing to say”.

The various media have evolved tremendously over time, said Mr Tai. “Many social topics are set by the media, as their influence far surpasses that of any government department. Therefore, it will be an advantage to organisations if they know how to deal with the media,” he said.

Mr Tai cited a number of recent social issues as examples to illustrate how an organisation should communicate effectively with the media. “The public and the media will pre-define their own opinions or even a conclusion on an issue. Organisations should first understand the public sentiment and discern people’s attitudes and preferences before responding to their particular points of concern,” he said.

When organisations respond to enquiries from the media, especially the visual media, non-verbal elements such as timely responses, pleasant facial expressions, and appropriate gestures and outfits can carry greater weight than words, Mr Tai said. Anyone in the media spotlight should act professionally and give public interest top priority, he added.

All people working for an organisation should develop a public relations sense, he said, because anyone or any issue may appear in the news headlines. The CityU community seemed to have got the idea, as nearly 100 staff, alumni and students attended Mr Tai’s lecture, including Professor Horace Ip Ho-shing, Acting Vice-President (Research and Technology) and Acting Dean (Graduate Studies), and Dr Andy Chun Hon-wai, Chief Information Officer.

In his welcoming remarks, Professor Matthew Lee Kwok-on, Acting Director of the Communications and Public Relations Office, said public image means a lot to a university. The public affairs lecture series have guest speakers invited from the public relations and media industries to share their experiences and insights, with a view to helping the CityU community to better communicate with the media so as to enhance the University’s image.

Mr Tai joined the broadcasting industry in the early 1980s. He has served as a presenter, producer and editor of public affairs programmes, and has been in administrative positions in radio and television. He is currently in charge of RTHK’s radio newsrooms and the operation of its six radio stations.