Man and Nature – Three stories with no definite messages

A novelist is good at recounting stories. Mr Li Rui, a renowned novelist from the mainland known for his “essay style” fiction, recounted three stories about the relationship between man and nature at the “City Cultural Salon” organised by the Cultural and Sports Committee of City University of Hong Kong (CityU) on 21 April. The three stories are: “Azalea Intoxicating the Fish”, “Seven Dwarfs in Shangri-La” and “Moss on Rock”. 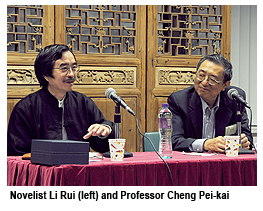 “Azalea Intoxicating the Fish” is a story recounted by a few Tibetan/Nahsi young singers about their extraordinary experience. One day they had a picnic by a river, enjoying the sight of fallen azalea petals drifting along the river. They were surprised to see fish get intoxicated after eating the fallen petals. What’s more, a hungry bear on the other side of the river got drunk and fell after eating the intoxicated fish. Some people speculated of a special substance in azalea petals which intoxicates both the fish and bear. But that is no more than speculation.

“Seven Dwarfs in Shangri-La” is based on Li Rui’s personal experience. He once visited Shangri-La in Yunnan Province. Attracted by the stunning scenic beauty, he was about to take some pictures when seven local children showed up and demanded 14 yuan from him for taking pictures there. He gave them 15 yuan. After receiving the money one of the children took out an account book matter-of-factly and entered the income. These poor children reminded him of the days when he lived and worked on the farm as a re-educatee, getting up at sunrise and going home at sunset.

“Moss on Rock” is a story about Li Rui’s visit to Osaka in Japan. While paying homage to the Buddha in a local temple, he was surprised to see the stone statue of the Buddha overgrown with moss, resulted from worshippers’ continued sprinkling of water on the statue, which made him ponder how human being’s faith and will could make life grow in an inconceivable manner whereas human being’s faith and civilisation could also bring slaughter and destruction to the world. 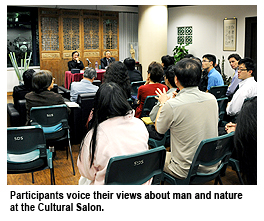 These stories are simple, but thought-provoking. Just like all good story-tellers, Li Rui did not offer too much explanation. However, his stories afforded food for thought. Some listeners saw in the first story the natural law of the weak falling prey to the strong and survival of the fittest. Some held the opinion that man should keep a comfortable distance from nature so as to appreciate its beauty. Others started to tell the difference between the Chinese and Japanese peoples from the third story. Still others intended to interpret the deeper meaning of these stories. The more one tried to interpret the stories, the more confused one became.

Li Rui, who was born in 1950, has gone through the same experiences as other people of his generation. His novels bear a marked brand of the six years he spent in the countryside of the Luliang mountainous areas of Shanxi Province. As he commented on other occasions, the city dwellers who are enjoying the fruit of modern civilisation have no right to demand that the country folk remain stay-put with what they have. Tourists like him, who go to visit Shangri-La may feel annoyed when local kids surround them asking for money when they try to take pictures of “the paradise on earth”. For the local kids, it is merely a way of living. No wonder he said this episode reminded him of the days of country life.

What kind of association will you draw from these stories?