“The relationship between the media and authority is similar to dancing the tango, with the authority always leading and the media following. But it takes two to Tango,” said Cultural Salon speaker Professor Lee Chin-chuan, Head of the Department of Media and Communication at City University of Hong Kong (CityU). 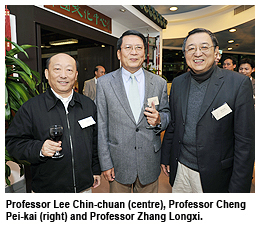 Professor Lee was the guest speaker of the salon titled “Between Reporters and Times: as in the cases of Xiao Qian, Lu Keng, and Liu Binyan”, staged by CityU’s Cultural and Sports Committee on 27 January. Professor Lee examined the interaction between reporters, their newspaper management and society, as well as the influence journalists can expect to wield. Guests attending the salon included journalists from the electronic and print media, academics and government officials from mainland China, Hong Kong and Taiwan.

Professor Lee cited the cases of Xiao Qian, Lu Keng and Liu Binyan, who had worked for Ta Kung Pao, the Central Daily in pre-1949 Nanjing, and the People’s Daily respectively and made remarkable achievements in journalism. These reporters tirelessly relayed major news stories but were invariably engulfed in severe political conflicts.

As contemporaries born in the early 1900s during a period of cultural enlightenment, each played a major role in shedding old rites and embracing a more modern culture. At a time when their country was plagued by social turbulence, they admired and promoted the advancements taking place in Europe, the US and USSR. They tried to fulfil their own dreams of speaking on behalf of the wider population through journalism, a new industry at that time. “In choosing to hold fast to their philosophy and opinions, they had to bear the consequences of their media pursuits.” 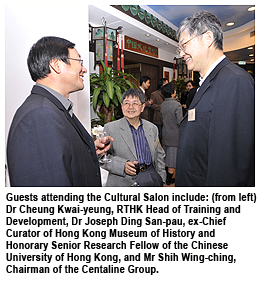 Professor Lee gave a brief account of each of the reporters’ careers against this tumultuous background. The three had lived through the Nationalist reign to the emergence of the Communist regime before facing the same fate of being denied the right to work in their profession for 22 years, from 1957. After their rehabilitation in 1979, they again went their different ways. At the age of 70, Xiao Qian left journalism to join the Central Research Institute of Culture and Literature. Lu Keng moved overseas and again became a political voice as a journalist. He published a book, Surely You’re Joking, Mr. Lee Teng-hui!, in 2001. Liu Binyan resumed his former trade as well, becoming an influential literary reporter. He was soon forced into exile from China, yet still pursuing his socialist ideals until his death.

Professor Lee interpreted the ideologies of the three reporters within the context of the publications for which they worked. In the ideological spectrum, the Central Daily is rightist, People’s Daily leftist, and Ta Kung Pao in the centre. “But it’s worth noting that of the three, Lu Keng believed in populism and was closer to the middle-of-the-road than the editorial of the Central Daily. He was in a way a “middle rightist” and in the end parted company with the newspaper. The writer-reporter Xiao Qian was influenced by the liberalism of the West and was a little more leftist than the editorial of Ta Kung Pao; he could be referred to as a “middle-leftist”. Liu Binyan adored Communism. The People’s Daily he served was naturally a leftist newspaper, but he was a famous “rightist” reporter in the office. He was eventually convicted of ‘bourgeois liberalism’ and expelled from the Party.”

Professor Lee hoped that his analysis of the three reporters at the Cultural Salon would shed some light on the history of journalism in 20th century China.

The talk lasted more than an hour and was followed by questions from the audience. The event allowed participants to ponder the implications for a new generation in regards to media education and professionalism, the Chinese and Western media structures and reporters’ relationships with society and their times.

Both the host of the Cultural Salon, Professor Cheng Pei-kai, who is also Chairman of the Cultural and Sports Committee and Director of Chinese Civilisation Centre, and Professor Zhang Longxi, Chair Professor of Comparative Literature and Translation, urged Professor Lee to expand his essay “Between Reporters and Times” into a book. “This would be of great significance to Chinese journalism,” said Professor Zhang.