CityU professor to deliver prestigious lectures in US

Professor Zhang Longxi, Chair Professor of Comparative Literature and Translation at City University of Hong Kong (CityU), has been invited to deliver lectures at Harvard University, Yale University and Wesleyan University in the US from 12 to 15 April. The invitations recognise Professor Zhang’s exceptional achievements in cross-cultural research. 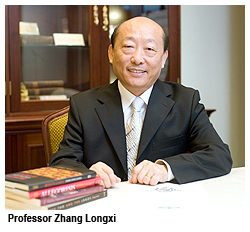 Professor Zhang delivers the annual Renato Poggioli Lecture at Harvard University on 12 April, on “The complexity of difference: A methodological issue in cross-cultural studies”. He is one of the few, if not the only scholar from outside North America to deliver the Renato Poggioli Lecture, which is considered one of the most distinguished lectureships in literary studies in North America.

By examining some recent works in East-West cross-cultural studies, Professor Zhang will argue in the lecture that we should pay attention to the complexity of difference and multidimensionality of things so as to avoid the mistake of subsuming individual differences under collective categories.

He will deliver a lecture on the same topic on 14 April, in the China Colloquium Series at Yale University, which is also an honoured lectureship.

On 15 April, Professor Zhang will deliver the 35th Mansfield Freeman Lecture at Wesleyan University, on “Nature and Landscape in the Chinese Tradition”. In this lecture, he will explore the relationship between man and nature, which he plans to explore further in a new book. The Mansfield Freeman Lecture has been given annually by an outstanding scholar or other luminary since 1975.

As a foreign member of the esteemed Royal Swedish Academy of Letters, History and Antiquities, Professor Zhang has attained world renown as a scholar and author on humanities and cross-cultural studies. His main research interest is in promoting cross-cultural understanding between China and the West, from the perspective of East-West comparative studies. His publications have been met with wide acclaim in the international arena.