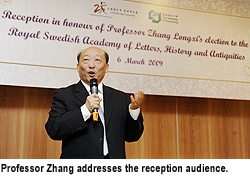 Professor Zhang Longxi, Chair Professor of Comparative Literature and Translation at City University of Hong Kong (CityU), has been honoured with a special reception marking his election as a foreign member of the esteemed Royal Swedish Academy of Letters, History and Antiquities. In doing so, Professor Zhang has joined the likes of French Enlightenment philosopher and writer Voltaire as an academician of the Swedish academy.

The Academy, established more than two and a half centuries ago, bestowed the honour upon Professor Zhang in recognition of his exceptional literary contribution to East-West cultural understanding and discourse.

Professor Zhang has attained world renown as a scholar and prominent author on humanities and cross-cultural studies. His main research interest is in promoting cross-cultural understanding between China and the West, from the perspective of East-West comparative studies. His publications have been met with critical acclaim in the international arena.

Professor Way Kuo, University President, offered effusive praise to Professor Zhang, both for his personal achievement and in regard to the acclaim he brought to the College of Humanities and Social Sciences. “This is indeed a day to remember,” said Professor Kuo. “Your achievement has brought honour to not just our University and Hong Kong but to the Chinese people everywhere.” 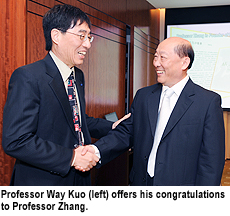 Professor Zhang described the accolade, one of the highest possible in the field of humanities, as representing a wonderful vindication of the quality of teaching, research and education at CityU. “Election to the academy came as a real surprise and is in many ways very humbling. Many people were nominated. So when I heard I had been shortlisted I still did not give it very much thought,” he said. “I am just happy for CityU, as we have so many good researchers here and I hope this can help to inspire them.”

Hosting the reception were two of Professor Zhang’s students, Tang Xiaosha and Zhang Meimei. The pair wore contrasting attire, with Zhang donning the traditional Chinese-style qipao, while Tang dressed in western attire. The sartorial selection was designed to reflect Professor Zhang’s assertion, contrary to Rudyard Kipling, that “the east is east and west is west, and the twain shall meet.” With the emergence of China, along with other developing countries, as an international economic force and the country’s political weight in Sino-Western relations, Professor Zhang’s works have taken on a heightened relevance.

“Misunderstanding between cultures often results in conflict, whether this manifests itself as racism and prejudices against different cultures or, on an international level, can even result in war,” said Professor Zhang. He said the focus of his work was important politically and culturally. “As China emerges as a player in international affairs it becomes especially important to the world that we dissipate some of the misconceptions and promote better mutual understanding between East and West,” he said. 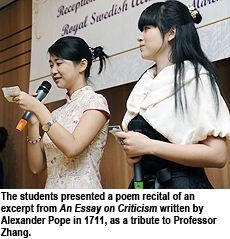 “Obviously in countries that are developing fast, it is very important for them to emphasise science and technology in order to make themselves richer, and this is all very understandable and commendable. At the same time, humanities sometimes get pushed aside as something not central to development. But, for any nation to be truly great, then cultural and moral values, ethics and philosophy are just as important, if not more so, when compared with any other particular skills,” said Professor Zhang.

Admission to the Swedish academy was based on Professor Zhang’s impressive studies on literary canons. Among his best-known titles are Mighty Opposites (1998), Allegoresis (2005) and Unexpected Affinities (2007). His 2005 treatise was described by critics as “belonging with the best works on East-West comparative poetics and literary interpretation”, “an instant classic” and “a groundbreaking work that contributes substantially to our understanding of literary texts from East and West.”

Professor Zhang’s contribution to promoting cross-cultural understanding between China and the West was also recognised by the first CityU Research Excellence Awards last year. He was conferred the Grand Award in recognition of his outstanding research achievements and excellence of his research programmes.