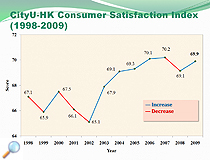 Consumer satisfaction rose to 69.9 (maximum 100) in 2009, close to the record high level it had reached in 2007, according to a survey conducted by the Department of Management Sciences at City University of Hong Kong (CityU).

The CityU-Hong Kong Consumer Satisfaction Index (CityU-HKCSI), an example of the University’s focus on research for the benefit of the community, measures consumer satisfaction with the quality of products and services and is intended to be an indicator of performance of Hong Kong businesses. CityU has been measuring consumer satisfaction for over a decade, providing a valuable reference for the business sector, particularly for those providing consumption goods and services. 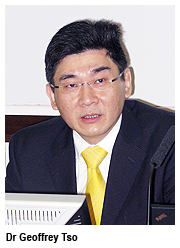 “The global economic environment had suffered from the financial tsunami but has gradually recovered since the second quarter of 2009, and consumer sentiment, which is affected by people’s confidence in the future of the economy, has also rebounded,” said Dr Geoffrey Tso Kwok-fai, Associate Professor in the Department of Management Sciences.

Results showed that the people of Hong Kong were most satisfied with Transport services and products (73.0), regarding them to be of the highest quality and reasonable price (relative to quality).

The second highest consumer satisfaction was recorded for Clothing & Personal Care (72.8), followed by Information & Entertainment services (71.4). Housing & Related Items recorded the biggest improvement but it remained the lowest scoring (67.5) category. This has been the pattern observed in the past few years.

Of the 68 individual goods and services covered in the index, consumers were most satisfied with postal services (82.0), music CDs (81.5), refrigerators (77.8), dairy products and non-alcoholic drinks (77.3), and edible oils (76.9). Postal services, music CDs and refrigerators were at the top in 2008, too. Comprehensive websites (76.5) entered the list of the top ten for the first time.

Music CDs and postal services have occupied top positions consistently over the past five years. The two worst performers since 2005 have been shopping in Shenzhen and job-seeking magazines.

CityU-HKCSI is based on more than 160,000 computer-assisted telephone interviews since 1997. For the 2009 survey, 13,057 interviews were conducted between June and August last year.