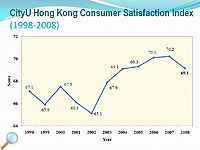 Consumer satisfaction in 2008 dropped to a rating of 69.1 out of 100, the same level as in 2004, after five consecutive annual increases, according to a survey conducted by the Department of Management Sciences at City University of Hong Kong (CityU).

The CityU-HKCSI is a component of the CityIndex to be launched by CityU to reflect the overall social and economic situation in Hong Kong. An example of the University’s focus on research benefiting the community, the CityU-HKCSI is a performance indicator for Hong Kong businesses, measuring consumer satisfaction with the quality of products and services. 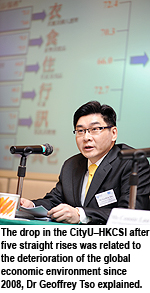 “The drop in the CityU-HKCSI after five straight rises is related to the deterioration of the global economic environment since 2008, as consumer sentiment is affected by people’s confidence in the future of the economy,” Dr Geoffrey Tso Kwok-fai, Associate Professor in the Department of Management Sciences, explained.

CityU has conducted the study on consumer satisfaction for over a decade, providing a valuable reference for the business sector. “Businesses have to take into account consumers’ thoughts and sentiments in order to respond to their demands. The CityU-HKCSI provides valuable first-hand data for the business sector and enriches the pool of resources available for local consumer culture research,” said Ms Connie Lau Yin-hing, Chief Executive of the Consumer Council.

Consumer satisfaction in four of the six products and service categories covered in the study decreased in 2008. Consumers are significantly less satisfied with Housing & Related Items, with a considerable drop in satisfaction towards private housing rentals (-5.4%). Satisfaction with Information & Entertainment and Transport services and products dropped 1.3% and 1.0% respectively.

“Consumer satisfaction with private house rentals witnessed the biggest drop and was probably due to the fact that rent did not decrease very much despite the property market slumping,” said Dr Tso. 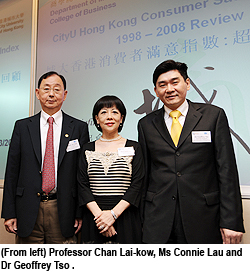 Results showed that Hong Kong people were most satisfied with Transport services and products (72.7), considering them to have the highest quality and most reasonable price relative to quality.

This was followed by Clothing & Personal Care (72.4) and Information & Entertainment products (71.4). Housing & Related Items remained the lowest scoring category (66.0). A similar pattern was found in results from the past few years.

Of the 68 major goods and services elements covered in the study, consumers were least satisfied with shopping in Shenzhen (61.6), job-seeking magazines (61.9), entertainment in Shenzhen and private housing rentals (each at 64.3) and internet service providers (64.9). The highest satisfaction levels were reported for music CDs (81.8), postal services (78.4), refrigerators (77.4), broadcasting/radio stations and small/medium electrical appliances (each at 77.3).

Music CDs and postal services have consistently occupied the top positions over the past four years. The two worst performers since 2005 were shopping in Shenzhen and job-seeking magazines.

CityU-HKCSI has conducted more than 150,000 computer-assisted telephone interviews since 1997. The 2008 survey was carried out from June to August last year, with more than 13,000 interviews conducted.

There is still a gap between the consumer satisfaction level in Macau and Zhuhai but it has narrowed. Macau must continue to enhance the quality of its services and products in order to stay competitive, Professor Chan added.

In collaboration with Capital University of Economics and Business, Central University of Finance and Economics, Fu Jen Catholic University, Taiwan, and Macau University of Science and Technology, CityU will launch the new Chinese Consumer Confidence Index and release results from the 2008 first quarter on 16 April. Dr Tso believed the influence of the financial tsunami on consumer attitudes will be fully reflected in the results.