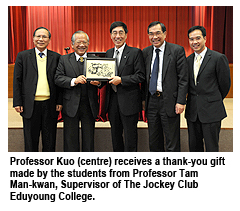 “Successful communication depends more upon content and sincerity than language itself,” said Professor Way Kuo, President of City University of Hong Kong (CityU), addressing more than 240 Form 4 to Form 7 students, teachers and parents on 5 February at The Jockey Club Eduyoung College. He was speaking at a Distinguished Lecture on “Language and Communication” at the invitation of the College’s founding Principal, Mr Tam Wah-hon. 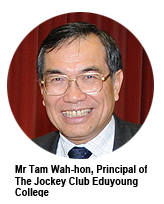 Professor Kuo used a set of figures to illustrate the many facets of communication, and quoted from real life a number of examples to show the very close relationship between communication and culture, humour, and emotions. “Knowing how to get along with others and good communication skills are essential to success,” he said.

Professor Kuo pointed out, however, that communication does not depend on language only. Both mainland China and Taiwan, for instance, have seen great political figures who, speaking corrupt Mandarin with Zhejiang or Hunan accents, have yet inspired hosts of followers with the messages and ideals conveyed in their speeches. “Language is but a tool, a communication medium,” said Professor Kuo. “However important it may be, it can only add to what you have to say.” 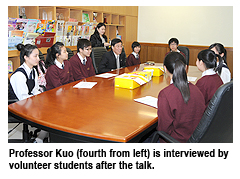 When the lecture was over, Professor Kuo answered many different questions raised by teachers, students, and their parents, and was interviewed by a group of approximately ten students. For the students, who were accustomed to communicating in Cantonese and English, having to talk in Putonghua seemed to be no longer a communication barrier, whether in the presence of more than 200 people or face to face with Professor Kuo.

The Jockey Club Eduyoung College believes in “All are educable”, and holds a Distinguished Lecture every year for parents, teachers and students in Tin Shui Wai. Scholars and experts have been invited to speak on 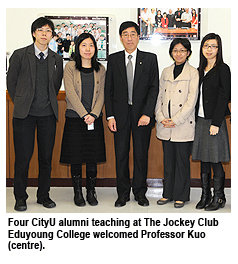 various topics to broaden students’ horizons and promote in them a spirit of adventure. The speakers over the years have included presidents or vice presidents from five local universities.

After the lecture, Professor Kuo had a friendly chat with four CityU graduates teaching at The Jockey Club Eduyoung College. He acquainted them with the University’s latest developments, and urged them to visit their alma mater from time to time, and help with its development.