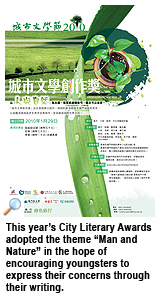 Young writers now have an invaluable opportunity to have their works reviewed by renowned writers and poets such as Mr Chang Ta-chuen, Mr Bei Dao, Mr Yang Ze and Mr Yang Zhao. All they have to do is to participate in the annual City Literary Awards organised by City University of Hong Kong (CityU).

Under the theme of “Man and Nature,” this year’s City Literary Awards aim to encourage young people in Hong Kong and Macau to try their hand at creative writing. The competition accepts entries until the end of this month.

The adjudicators comprise a team of 12 prominent writers, including Mr Chang Ta-chuen, who is regarded as one of the best Chinese novelists. As a shining star of the literary circle in Taiwan, Mr Chang’s novels gauge the pulse of the contemporary world through the genre of magic realism. Another adjudicator, Mr Bei Dao, is a leading contemporary Chinese Meng Long (elusive) poet. Nominated for the Nobel Prize in Literature, he is an Honorary Member of the American Academy of Arts and Letters. His collections of poems have received many literary and writing awards from Sweden and America and have been translated into more than 20 different languages. 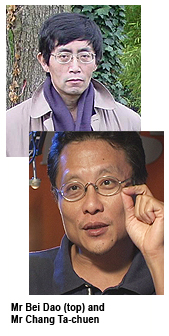 Mr Yang Ze, another renowned poet, published his first collection of poems at the age of just 23. As the Executive Editor of Chung Wai Literary Monthly and the Chief Editor of the China Times supplement, he has had a profound influence on contemporary young writers. Mr Yang Zhao, Vice President and Chief Writer of The Journalist, is a prominent literary critic with diverse roles as cultural writer, political commentator and historian. Also on the adjudicator panel are Mr Liu Ke-shiang, a Taiwanese writer and naturalist nicknamed “Bird Man”, and Ms Chi Zhijian, a promising Chinese female writer, Mr Lu Hao, Professor Liu Zaifu, Mr Li Rui, Professor Cheng Chou-yu, Mr Perry Lam and Professor Xu Zidong. Their participation will ensure the competition is a shining light on the literary circuit this year.

Given the public concern about climate change and environmental protection, this year’s competition has adopted the theme “Man and Nature” in the hope of encouraging youngsters to express their concerns through their writing.

“There is a public misconception that urban development has an adverse effect on nature,” said Dr Ma Ka-fai, Assistant Director of CityU’s Chinese Civilisation Centre. “While cities are created by mankind, nature is what humans rely on for survival. They should not be opposing forces. The ‘Man and Nature’ theme allows participants to explore a deeper meaning in their writings.”

The City Literary Awards form part of the City Literary Festival, organised by the Cultural and Sports Committee, Chinese Civilisation Centre and CityU’s Department of Chinese, Translation and Linguistics. The Hong Kong Arts Development Council and Macao Foundation are co-organisers and Hang Seng Bank is the sponsor for the first time. This is the fifth year of the City Literary Awards since its launch in 2006. Total entries received in 2009 represented an increase of more than 90% since its inception year. All winning entries will be published in a collection by CityU in April the following year. Students in tertiary institutions and youngsters aged 15-24 in Hong Kong and Macau are welcome to submit their entries to any of the four categories, namely prose, short stories, poetry and cultural and art criticism.

Various festival activities will be held from 23 to 26 April, including the opening ceremony and seminar, small group discussions, dialogue with young writers, a poetry workshop and Macau’s historical buildings visit. The award presentation ceremony for the City Literary Awards will be held in May.