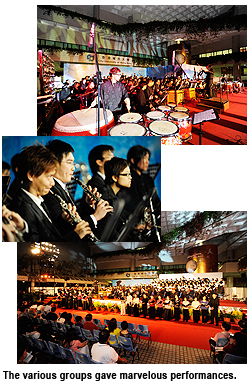 The first outdoor concert held at the University Circle, it had adopted the theme of heaven, earth and man. Both Chinese and Western masterpieces were performed to encapsulate the three elements and bring a message of peace to the world. 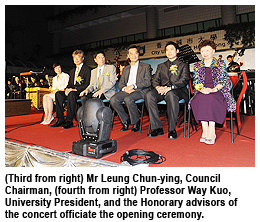 The concert climaxed with the song Good News, jointly performed by the CityU Chinese Orchestra, Philharmonic Orchestra, CityU Choir and the National Taiwan University Symphony Orchestra. Good News was originally known as Good News from Beijing Reaching the Border Villages. Dr Ruth Yee Wing-yu, Associate Director of Student Development Services and the Organising Committee Chairman of the concert, specifically wrote lyrics for the latter part of the piece to echo the concert’s theme. Twenty-five alumni and students paraded a flag around the venue to demonstrate full support of the University’s anniversary. 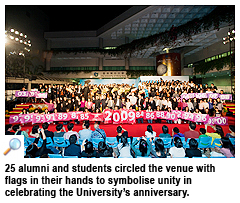 Representatives from each of the performing groups said music was an ideal gift to the University. The performance represented a very good opportunity to work with other musicians. Despite only practicing together the day before the performance, the audience gave them a standing ovation to conclude a delightful evening’s entertainment.