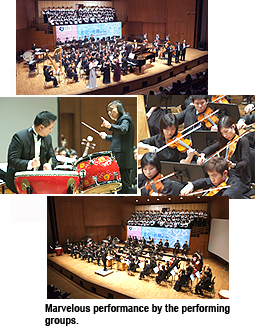 The performers selected a programme that allowed the audience to experience the journey of a world traveller. To capture his early life, the CityU Chinese Orchestra performed “Spring of the Southern River” and “Dance of Tiger and Dragon”. The start of a new phase in the life of the world traveller was represented by “The Chinese” performed by the CityU Joint Choir and Chinese Orchestra, and by the “Virtual Musical Tour of Guizhou” created by the School of Creative Media. The concert reached its climax when the CityU Joint Choir sang various songs such as “Ali-Shan Song”, selections from West Side Story and “Any Dream Will Do”, and when the CityU Philharmonic Orchestra performed Mussorgsky’s “Picture at an Exhibition”. This section described what the world traveller had experienced and the joy of his discoveries. The concert came to an end with “The Spirit of Prosperity”, “Legend of the City” and “Choral Fantasia”, which described the return of the world traveller as he revisits the culture to which he first belonged, the main theme of the concert.

Audience enjoyed the performances very much, and even clapped with the beats of “The Chinese”. The performances earned a standing ovation, bringing to a close a thrilling evening’s entertainment. 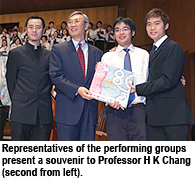 Professor H K Chang, University President, was pivotal in the initial establishment of the performing groups. Students, alumni and colleagues at CityU dedicated the concert to Professor Chang in appreciation of his unwavering support in the promotion of arts and culture in CityU over the years. Professor Chang thanked the performers and said he was proud to see people in CityU trying their best to reach their goals. He said he hoped to return to CityU in 20 years time to witness the development of his oasis, CityU. “People in CityU are so great, and I am proud to be one of them,” he said.

Professor Lilian Vrijmoed Kwan Lee-ping, Dean of Student Learning, said the performers had gained valuable experiences. “This concert is a great opportunity for students to showcase their musical talent and help them improve their communication skills, build team spirit, learn how to shoulder responsibility and face challenges,” she said.

Representatives from the three performing groups said they were honoured to participate. “It is a new experience for the CityU Choir, joined by the Alumni Choir and Staff Association Singing Group, to co-perform songs with the Chinese Orchestra and Philharmonic Orchestra. Although the Choir cannot practise with other groups all the time, I was surprised at how well we performed together,” said Michael Poon Lap-hang, a Year 2 student in the Department of Electronic Engineering and the President of the CityU Choir. 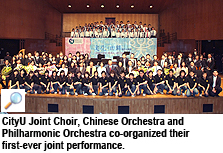 The President of CityU Philharmonic Orchestra, Jason Tang Yin-pong, a Year 2 student in the Department of Manufacturing Engineering and Engineering Management, said that the large number of performers and crew, more than 250 people, created a major logistical challenge, for example transporting musical instruments and set changes during breaks. Jessica Tsang Man-ha, a Year 2 student in the Department of Management and a representative from the CityU Chinese Orchestra, said she was excited to have had the chance to participate in this concert. “Even members who have already graduated wanted to take part,” she said. “We all enjoyed organizing the event and practising the pieces.”