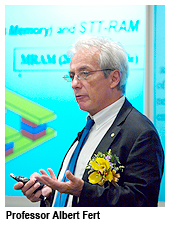 Professor Albert Fert, 2007 Nobel laureate in physics and Professor at the University of Paris-Sud, delivered a lecture in the France-Hong Kong Distinguished Lecture Series, a series of high-profile lectures co-organised by the French Academy of Sciences, the Consulate General of France in Hong Kong and City University of Hong Kong (CityU). The theme of the lecture held on 21 October was “Spintronics: Electrons, Spins, Computers and Telephones”.

The lecture was the eighth of the series taking place at CityU, given by world-renowned scientists at the cutting edge of their chosen fields. It is also part of the celebration programme of the 25th anniversary of CityU.

Spintronics also known as magnetoelectronics, is an emerging technology that exploits the intrinsic spin of the electron and its associated magnetic moment, in addition to its fundamental electronic charge, in solid-state devices. It has applications in computer hard drives, contributing to their rapidly increasing storage density along an exponential growth curve. 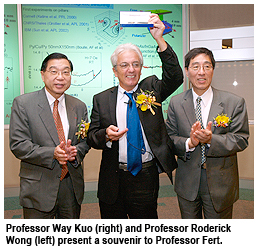 Professor Fert pointed out that other applications had emerged in this new research field, promising developments in telecommunications. “In my talk, I will review some of the most promising directions of today: spin transfer phenomena, spintronics with semiconductors, molecular spintronics, single electron spintronics, Spin Hall Effect (SHE) and Quantum Spin Hall Effect (QSHE). Spintronics with semiconductors aims to achieve some fusion between conventional electronics and spintronics.”

Professor Fert shared the 2007 Nobel Prize for Physics with Professor Peter Grünberg of Germany for their discovery of Giant Magnetoresistance, the technology used to read data on hard disks. Thanks to this technology, it has been possible to miniaturise hard disks so radically in recent years. Sensitive read-out heads are needed to be able to read data from the compact hard disks used in laptops and some music players, for instance. Professor Fert also received the Wolf Prize in Physics in 2006 and the Japan Prize in 2007.

Professor Roderick Wong Sue-cheun, Vice-President (Research and Technology) and Dean of Graduate Studies, welcomed the guest speaker before Professor Way Kuo, University President, paid special tribute to the joint efforts made by the co-organisers that allowed such luminaries as Professor Fert to visit CityU and deliver such high-level talks. 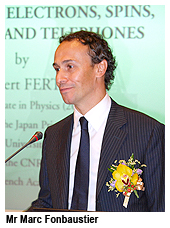 Mr Marc Fonbaustier, the Consul General of France in Hong Kong and Macau, emphasised that the ongoing lecture series presented a wonderful opportunity to build one more bridge between France and Hong Kong in terms of high-level research exchanges. He pointed out that the large audience at CityU was benefiting from the insight of a Nobel laureate who was a pioneer in three respects, namely research, nanotechnology and in cooperation between academia and commerce.

The France-Hong Kong Distinguished Lecture Series was first launched in 2005 as an initiative of Professor Philippe G. Ciarlet, Department of Mathematics. Professor Ciarlet, a Member of the renowned French Academy of Sciences, engineered the agreements with both the French Academy and the prestigious Collège de France in Paris, which brings lectures of the highest calibre to CityU.