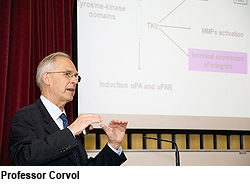 Professor Pierre Corvol, President and Chair of Experimental Medicine, Collège de France, Paris, delivered a lecture in the France-Hong Kong Distinguished Lecture Series, as part of the high-profile series co-organised by the French Academy of Sciences, the Consulate General of France in Hong Kong and City University of Hong Kong (CityU).

The lecture, “Deciphering the Vascular Tree”, examined the rapidly growing field of angiogenesis, or the growth of new blood vessels.

This was one in a series of distinguished lectures taking place at CityU, given by world-renowned scientists at the cutting edge of their chosen fields. It is part of the celebration programme of the 25th anniversary of CityU.

Professor Roderick Wong Sue-cheun, Vice-President (Research and Technology) and Dean of Graduate Studies, welcomed the guest speaker and praised the long-standing cooperation that had developed between CityU and the five-century-old Collège de France.

Mr Jean-Pierre Thébault, Consul General of France in Hong Kong, said the latest lecture created its own slice of history, with Professor Corvol being the first president of the Collège de France to visit CityU. “As we continue to build bridge between France and Hong Kong in terms of high-level research exchanges, we hope that this visit will mark a significant precedent,” said Mr Thébault. 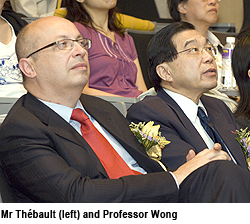 Professor Corvol said the field of angiogenesis is a rapidly evolving study area. “In a few years, most of the main vascular growth factors involved during development have been identified, as well as factors responsible for the differentiation of arteries, veins and lymphatic vessels,” he said. “The role of angiogenesis in tumoral growth and in some inflammatory diseases has been established in animal models and human pathologies.”

Angiogenesis allows delivery of oxygen and nutriments to tissues. Vascular Endothelial Growth Factor (VEGF) plays a major role in these different types of angiogenesis. VEGF inhibition is a promising therapy in tumoral and ocular pathologies.

Another distinguished scholar from France, Professor Albert Fert, 2007 Nobel laureate in physics and Professor at the University of Paris-Sud, will deliver the eighth lecture of the series on 21 October.