City University of Hong Kong (CityU) was awarded a grant of nearly HK$5 million from the new Strategic Public Policy Research (SPPR) Funding Scheme established by the Research Grants Council (RGC). CityU will use the funds to conduct a research project on the family carers of persons with Alzheimer’s disease and support and promote long-term public policy research. 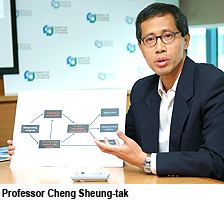 As global populations in developed societies continue to age, those aged above 70 years are expected to comprise 23% of the Hong Kong population by 2033. About 10%, or 160,000 people, may suffer from dementia, with Alzheimer’s disease being the most common form leading to a decline in cognitive and intellectual functions. Professor Cheng Sheung-tak from the Department of Applied Social Studies, who leads the research project, said the disease not only affects patients but also their family. The latter can suffer from a heavy economic burden and mental stress caused by factors such as a lack of privacy, social life restrictions, and work and family life pressures.

“In Hong Kong, 80% of patients with dementia live with their spouse and children who take care of them. However, there is limited social support and little awareness given to these family caregivers,” said Professor Cheng. “Mental and physical fatigue due to a heavy economic burden and other stresses will in turn have an adverse effect on patients. Hence, there is a dire need to improve support for the family carers.”

Professor Cheng suggests an innovative benefit-finding programme to help the carers find benefits in the caring experience. For example, by finding more meaning in life and developing an awareness of the benefits of interpersonal relationships, the caregivers may reduce their stress by adopting a more positive attitude.

The Hong Kong government has placed an emphasis on the dementia issue in recent years. Local research projects, however, have only focused on issues such as insufficient resources. Professor Cheng expects that his research project will have a positive effect on long-term public policy development and may alter the community’s negative views on taking care of Alzheimer sufferers.

Professor Cheng’s research project will, for the first time, invite the participation of cross-generational caregivers to reinforce the mutual support between family members - the patients’ spouse and children - and their function as caregivers. The project will also help caregivers develop a social network to solicit support for each other.

Through the New Territories East Cluster, Professor Cheng will invite about 300 families, comprising 450 people, to take part in a five-year research project. Using a randomised controlled trial design, the research will collect data about caregivers in six stages. Factors measured will include the carers’ stress, depression, coping ability, social support, and physical and psychological well-being, as well as care-recipients’ behavioural and psychological symptoms, and functional and cognitive impairment. The data will be analysed to determine the effect of the benefit-finding programme.

Professor Cheng has long been engaged in the study of issues related to aged healthcare, prevention of elderly depression and delaying of ageing. He secured more than HK$1 million funding in the 2007-08 Competitive Earmarked Research Grant to integrate biological technology with the study of dementia treatment. Through scientific research, he proved for the first time that playing mahjong boosts cognitive functionality in persons with dementia.