Cultural Salon tunes in to music 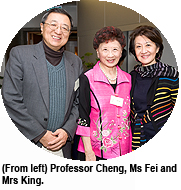 Professor Cheng Pei-kai, Director of Chinese Civilisation Centre and Chairman of the Cultural and Sports Committee, made the welcoming speech. "Ms Fei is from a family of art and culture; her father Mr Fei Mu was one of the most distinguished film directors in China. With the same genes in her blood, Ms Fei is highly respected for her total dedication to art and music in Hong Kong."

Aided with some precious photos, Ms Fei explained to the attenders how vocal music evolved in Hong Kong since the 1930s up to the present day. She described the introduction of vocal music to Hong Kong, the founding of local choirs and the birth and rise of vocal soloist performances in the territory. 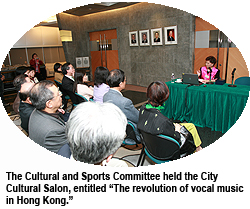 "I have lived in Hong Kong for half a century but it seems there's still a lot for me to do to promote music here. Hong Kong has a rich pool of musical talents and an appreciative audience, so I'm sure music will have a bright future in Hong Kong," concluded Ms Fei.

Her talk was followed by an enthusiastic exchange of ideas between the speaker and the other participants. Dr Ruth Yee Wing-yu, Associate Director of Student Development Services, said Ms Fei's talk was insightful and intriguing, and suggested that she collect her ideas into a book to benefit even more people. Professor Julia Tao Lai Po-wah, Chief-of-Staff and Acting Vice-President (Development and External Relations), and Mrs Alice King, Chairman of the Ink Society, also attended the Salon. 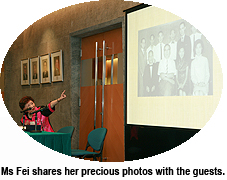 Ms Fei started taking piano lessons at an early age and was admitted to the Nanking National Conservatory of Music. She received vocal training under Professor Chao Mei-pa in Hong Kong in 1950 and later studied at the Conservatoire National Superieur de Musique de Dause De Lyon in France. She pursued further vocal training under Madame Lotte Schoene at Schola Cantorum in Paris.

Ms Fei has been ardently advocating the choral art in Hong Kong and boosting exchanges between musical circles in Hong Kong, the mainland and the ouside world. In addition to setting up music scholarships, she founded the Allegro Singers in 1964 and sponsors the Hong Kong Schools Music Festival. Ms Fei was awarded the Bronze Bauhinia Star by the Hong Kong Special Administrative Region, and is Chairman of the Music Committee of Hong Kong Arts Development Council, Advisor to the Leisure and Cultural Services Department of Hong Kong, Chairman of the Hong Kong Association of Choral Societies, and Music Director and Conductor of the Allegro Singers.