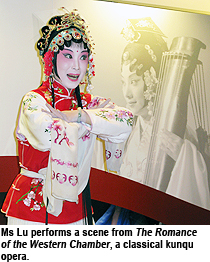 Professor Pai Hsien-yung made a special trip to Hong Kong to attend the Cultural Salon sponsored by the Robert H.N. Ho Family Foundation and co-organised by CityU and other local universities. Professor Pai has been promoting kunqu opera for years. He made a speech at the Salon prior to a performance by artists from the Suzhou Kunqu Opera Theatre of Jiangsu. Professor Pai commented that one of the performers that night happened to be among those he had introduced at CityU's Chinese Civilisation Centre back in 2005.

Professor Way Kuo, University President, was a guest, and he started with a couplet cited earlier in his blog, "A real hermit lives downtown; a real scholar cares about this world," to talk about the preservation of Chinese culture. "We need to display wisdom, compassion and courage in our deeds; we need to study all things in Nature to seek genuine knowledge, not only understanding it but also putting it into practice. The same applies to the promotion of Chinese culture, namely we must not only grasp the essence of the culture but also try our best to embody it in our lives," said Professor Kuo. 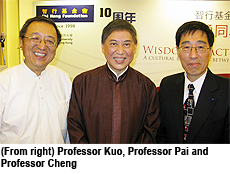 Kunqu and the guqin, a seven-stringed Chinese musical instrument, are gems of Chinese culture, which have been acclaimed as two of the "Masterpieces of the Oral and Intangible Heritage of Humanity" by the United Nations. Renowned kunqu actress Ms Lu Jia and guqin virtuoso Professor Li Xiangting gave a kunqu and guqin performance respectively for the audience.

Ms Lu, a member of Suzhou Kunqu Opera Theatre of Jiangsu, acted a selected scene from The Romance of the Western Chamber, a classical kunqu opera. She brilliantly played the role of Hung Niang, the ingénue of a maidservent, who visualizes how her young lady Miss Tsui Yingying and her scholar lover Mr Chang Hung are enjoying their romantic encounter in the chamber around midnight. 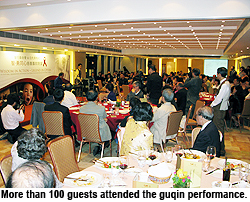 Professor Li Xiangting enthralled the audience with a wonderful recital on the famous guqin "Jiuxiao Huanpei", one of the few extant ancient instruments from the Dang Dynasty (AD 618-907).

The Cultural Salon was co-organised by the Cultural and Sports Committee, the Robert H.N. Ho Family Foundation and Chi Heng Foundation. A charity auction was held, and proceedings will be used to subsidise the studies of mainland students suffering from AIDS.