Professor Cheng Pei-kai, Chairman of the Cultural and Sports Committee and Director of Chinese Civilisation Centre, 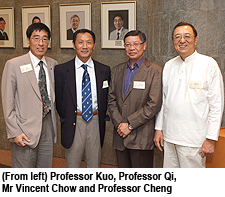 made the welcoming speech. “There is an interesting story about the name of Professor Qi Dongfang. When Professor Qi, carrying a Chinese national flag, led an excavation team to working in a desert, a Han Dynasty tapestry was found. Amazingly, the article was embroidered with characters saying ‘Five stars arising from the East is auspicious for China!” (Professor Qi’s given name “Dongfang” literally means “East” and the Chinese national flag has five stars on it.)

“In my twenties, I learned from my teachers. In my thirties, I learned by reading. And at 40, I started to improve myself through exchanges with outstanding scholars, namely by going to salons,” said Professor Qi.

Professor Qi stated humbly that he could hardly set a definition for “cultural relics”, but would like to discuss four topics surrounding the term : trash, ancient objects and cultural relics; fakes, imitations and genuine relics; authentication and research of cultural relics; and their value, worth, and prices.

Professor Qi indicated that mainland China passed the Law on Protecting Cultural Relics in 1982, which states clearly that “cultural relics generally must possess historical, artistic and scientific values that symbolise the culture of the nation.”

“Whatever definition we may have for cultural relics, what really matters is to respect all those treasures left over by our ancestors,” Professor Qi concluded. 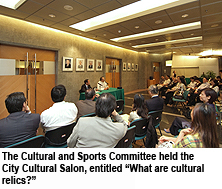 Following his talk, the audience raised various points and opinions, including the relationship between politics and cultural relics, as well as their value and prices. Professor Way Kuo, University President, and Mr Vincent Chow Wing-shing, University Council Member, also took part in the salon.

As visiting professor at the Chinese Civilisation Centre, Professor Qi has been giving 12 talks on “Cultural Relics and Heritage” from September to November, to discuss many of China’s archeological findings and their historical and cultural implications.