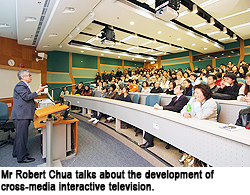 The School of Creative Media of City University of Hong Kong (CityU) will launch a new degree programme of Bachelor of Arts (Hons) in Digital Media Broadcasting in the school year 2009/10. The school has created a series of talks entitled “Future of TV” to inform staff, students and the general public on the developments of broadcasting media.

The first talk in the series was given on January 15 by guest speaker Mr Robert Chua Wah-peng. He talked about his 45 years of experience in the TV industry and the evolution of TV from passive broadcasting to interactive media.

“We have seen a lot of cases of integration between different media types in recent years, such as that of broadcasting media with internet and mobile devices. Communication is no longer confined to one single platform; now it can be done on multiple platforms simultaneously,” said Chair Professor Horace Ip Ho-shing, Acting Dean of School of Creative Media. “This new trend is just starting, but promising to bring about a lot of progress in the media industry.”

Professor Ip praised Mr Chua as a pioneer and veteran professional in the industry. Mr Chua set up Asia’s first cross-media interactive channel. He knows inside out the media industry and its growth over the past half century, with his deep insights about the future in the field.

Mr Chua has personally experienced the massive changes in the industry from the days of black-and-white TV up to the era of digital broadcasting. He helped to launch TVB and created some classic shows such as “Enjoy Yourself Tonight” (EYT) and “Miss Hong Kong Pageant”. He founded the satellite channel CETV and such interactive channels as the Health and Lifestyle Channel (HLC).

“TV industry is losing audience to the Internet, especially those of the young generation,” said Mr Chua at the talk. “The Internet is forcing the TV industry to innovate. The future of TV will be media convergence.”

Mr Chua cited his Health and Lifestyle Channel as an example to show that the latest in broadcasting media is not just interactive - it is cross-media interactive. Internet, SMS and video streaming combine to enrich the content of broadcasting.

Mr Chua stressed that TV industry should take on social responsibility. The industry should produce high-quality programmes with positive messages. He reminded young people aspiring to join the industry that working in broadcasting media is a tough job. They must have a passion for the media work in order to be successful.

The School of Creative Media is launching the new degree programme in digital media broadcasting in a bid to respond to the advances in the industry. “With the advent of the Internet and mobile communication technologies, together with the launching of digital terrestrial television broadcasting in Hong Kong, there is a growing demand for a new generation of digital media broadcasting professionals,” said Ms Cheung Suk-yee, Assistant Professor of the school. “The new programme will provide a broad-based training with a solid foundation in the creative, technological and business aspects of the ever changing media industry.”

According to Ms Cheung, the programme aims to prepare graduates to take on the artistic, innovative, technological and managerial roles in the media sector, in such fields as television, internet and telecom. It puts students on the frontier of broadcasting technologies and enables them to grasp a broad range of digital media skills, concepts, content, forms, trends and terminologies.

In their first year of study, students need to take courses in basic skills and approaches shared by the digital media industry. It comprises introductory courses in a wide range of options such as digital production fundamentals, basic sound design, digital storytelling, marketing and communications theory.

In their second and third years, students need to take more advanced courses and will be able to focus their study in areas of interest by taking one or more of the elective concentrations including Design and Production, Marketing and Management and Communication.