Conference examines global use of English

Over the last few decades, the English language has been growing in 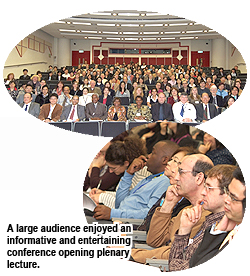 response to the demand for a common means of communication across the world community.

With Hong Kong’s preeminence as a multilingual city, it was both appropriate and timely that City University of Hong Kong (CityU) staged the 14th Conference of the International Association for World Englishes from 3 - 5 December. The title of the conference was World Englishes and World’s Languages: Convergence, Enrichment or Death?

The conference is one of the most prestigious of its kind in the world in English Studies. Numerous distinguished scholars from around the world are participating in the conference.

Organised by the Department of Chinese, Translation and Linguistics of CityU and held in Hong Kong for the first time, the conference has attracted a number of papers relevant to the Hong Kong and Asian contexts among the many lectures being presented.

The conference was opened by Dr Jerry Yu Jer-tsang, Chief Information Officer, and Professor Jonathan Webster, Head of the Department of Chinese, Translation and Linguistics. In his opening address, Dr Yu provided the international audience with some insight into the development of English and its usage in Hong Kong. 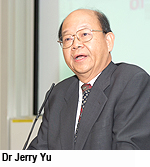 Given Hong Kong’s demography and history, Dr Yu said it was very important that this conference took place in the city. Before the transition from British to Chinese sovereignty, there was a perception that Chinese-language schools were perhaps second rate to English schools but after 1997, the idea took hold that Hong Kong students would learn better if taught in their mother tongue. Dr Yu said the debate about whether to teach in their native language or English was now a common condition throughout the world and in particular in higher education institutions.

Conference convenor Professor Webster pointed out that CityU was active in the study of world Englishes. The University was in the process of building up a repository of library books and publications on the subject and had developed a website (www.worldenglishes.ctl.cityu.edu.hk) that would become a database and archive for both the library collection as well as papers submitted by international expert authors and researchers. 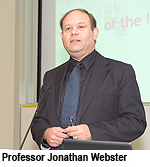 Plenary speaker Professor Kingsley Bolton, Head of Department of English, Stockholm University, went on to deliver a highly informative and entertaining lecture on World Englishes, Asian Englishes and globalisation. Drawing upon research he conducted in Hong Kong in the early 1980s, he highlighted the steady growth of English usage in Hong Kong from the 1930s to present day and discussed way in which “Hong Kong English” had evolved and been shaped by the local population.

In discussing the hybrid forms of English in the region, so-called “Asian Englishes,” Professor Bolton said, “These Englishes are now manifestly Asian languages in their own right.” 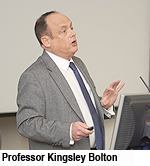 Globalisation’s role in effectively exporting English had led to the language being ‘outsourced’ to countries such as India and the Philippines in the form of call centres that field telephone enquiries from the customers of western corporations, an phenomenon studied by Professor Bolton. His plenary talk included some humourous video footage of the training techniques adopted in these call centres designed to teach British and American accents to the local call centres workers.

The three-day conference was preceded by two days of workshops.