G-LEAPing into study course Down Under

The Global Legal Education and Awareness Project (G-LEAP) of summer 2008 offered CityU law students the chance to study Intellectual Property Law at Monash University in Melbourne, Australia. The one-month study programme was a golden opportunity to improve our understanding of a jurisdiction outside Hong Kong. It also allowed us to get to know Australia and our classmates. The trip was not only educational but also fun and memorable.

The four of us acted as student volunteers for the party of 50 G-LEAP students, assisting in matters such as roll calls, room and tour 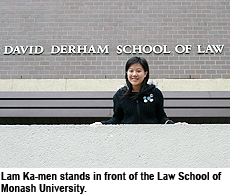 arrangements, liaising with Monash University and corresponding with the School of Law back in Hong Kong. It was a most rewarding experience for all of us.

The course focused on the Copyright Act within the scope of the Intellectual Property (IP) laws of Australia. Students attended classes three times a week, comprising two mornings and one full day. The interactive tutorials requiring students to think spontaneously on a hypothetical question and to present an answer within a limited timeframe were both challenging and good training. 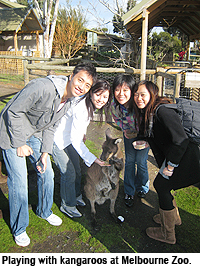 We stayed and studied at the university campus in Melbourne’s south-eastern suburb of Clayton for the first two weeks. The rural environment with its trees, fields and beautiful lake was certainly a scene unfamiliar to many Hong Kong students. However, moving to Uni-lodge and attending classes in the Law Chambers in the city during the last two weeks was a blessing to those who prefer a more dynamic lifestyle.

There was more to Monash than study. In the free time or at weekends, students enjoyed fine dining and shopping in the city of Melbourne, explored scenic country locations such as the Great Ocean Road and Phillip Island, tried gold panning, visited Melbourne Zoo to see kangaroos and koalas. Some even managed to fly to Sydney and Canberra during the long weekend, while the studious ones took time to visit the Melbourne Supreme Court or State Library of Victoria, both of which are impressive examples of Victorian architecture.

The School of Law has done a great job in launching G-LEAP to broaden the horizons of CityU law students. It has also been responsive to problems encountered by students during the trip. G-LEAP is far more than Australian IP law. We had the opportunity to practice English in an English-speaking country, learning to be independent and getting to know our peers better through living together - all assets for our future.

G-LEAP is designed to promote excellence in legal education with a view to providing opportunities for law students to gain a global perspective on the study of law. Students participating in the G-LEAP will be able to spend a month studying a course at a renowned university overseas. Apart from Monash University, School of Law also signed an agreement with University College, Oxford, UK, and around 50 law students will spend a month studying at the College in June 2009. Under the collegiate system, the University College is one of the 39 independent, self-governing colleges at the University of Oxford.