CityU thanks donors and supporters at Thanksgiving Dinner 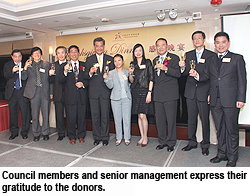 December for donors and supporters in appreciation of their contributions to the University.

More than 140 guests, including philanthropists, businessmen, industrialists, faculty and staff attended the annual event organised by the Community Relations Committee, at which the latest status of the Fourth Matching Grant Scheme was announced.

"Although our fund-raising project has been affected by the Sichuan earthquake, it still turned out a great success," said Dr Dennis Sun Tai-lun, Chairman of the Community Relations Committee. "We would like to express our gratitude to donors

Mr Leung said he had now learnt more about CityU, one of the world’s top 150 universities, since assuming the Chairman's position six weeks ago, having worked closely with Professor Kuo, the Council Secretariat and other CityU colleagues. Mr Leung has been involved in Hong Kong's education sector since 1997. "Relatively speaking, there is still room for improvement in Hong Kong's quality education. As CityU's Council Chairman, I look forward to working together with the Council, senior management team, faculty and staff of CityU to promote quality education, which is the mission of both CityU and the community," he said.

"With support from various sectors, CityU can realise its full potential and well meet the challenges ahead. I am here to thank you all for your donations and support, which are very important to both CityU and Hong Kong as a whole," he added.

Professor Kuo thanked donors, alumni, businessmen and industrialists for their donations and support. "We will strengthen our ties with alumni to aid in the development of CityU. We'll set our target even higher, namely to try and rank among the world's top 100 universities," he added.

More than HK$50m was raised as of 31 October 2008 for the Fourth Matching Grant Scheme, totalling HK$95m after the government's matching grant joined in. Half of the sum will be used to upgrade the University's teaching and research facilities, 30% for student development, and the rest will go towards the University's development. 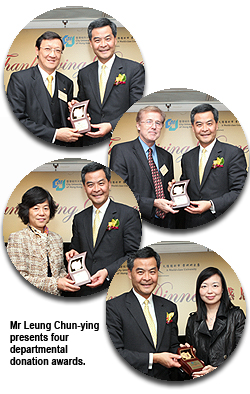 The Fourth Matching Grant Scheme started on 1 January 2008 and will end on 28 February 2009. So far, there have been more than 3,300 donors, including friends of CityU, members of the CityU Council, faculty and staff, alumni and students.

Of the donors, Dr Chan Sui-kau, Mr Peter Ho Ka-nam, Mr Gabriel Yu Chi-ming, Mr Johnny Yeung, Ms Helen Ng and others spoke of their friendship at CityU and how they had supported the University. A highlight of the event was the presentation of awards and souvenirs to Honorary Members and Tree Members of the Alumni Giving Club and Staff Giving Club, as well as other award-winning departments and individuals. The prizes were awarded as follows: