Siu Chi-man, graduate of Bachelor of Arts (Hons) in Creative Media with 1st-class Honours, was awarded HK$300,000 by the Lee Hysan Foundation Fellowship of the Asian Cultural Council for his excellent academic performance

and outstanding art research proposal. The sponsorship allowed him to tour around the US in 2007 and 2008, when he visited museums and attended major events in the field of digital media. He also examined curriculums designs in the discipline of new media in American universities, and studied the growth of the local video-making and new-media productions. He hopes his award will encourage his fellow students to work hard on their creative endeavours.

"From SCM, I have not only learned theories about creative work and art but also got many opportunities to practise and improve," said Siu Chi-man. In his final year, he was the first Hong Kong new-media artist to receive an honourable mention at the prestigious Media Art Biennale in Poland, for his video Sliding Whites.

Siu Chi-man is now studying Design and Media Arts at the University of California, Los Angeles. Prior to that, he taught in the Department of Printing and Digital Media at Hong Kong Institute of Vocational Education. To pursue his dream, he gave up teaching, which he loves though, and went on for further studies in media arts.

Hui Fong-wah, another graduate of Bachelor of Arts (Hons) in Creative Media, has been elected as the Bloomberg Emerging Artist 2008 and received a sponsorship of HK$100,000, plus a monthly allowance, for her artistic achievements in sonic installation. She showcased two pieces of her sonic installation collection in her exhibition, entitled Translucent Noise, at the

Hong Kong Arts Centre from October to November. Hui Fong-wah tries to deliver the meaning of words through sound and visual interpretations, allowing audience to share the joy of creative work by joining the author in operating the installations.

As with Siu Chi-man, Hui Fong-wah is also a teacher. After trying her hand at different jobs, she feels teaching is the career that suits her the best. "My students may not all become artists, but I hope to bring art to more people and give the youngsters more opportunities to learn about various forms of art," she said. In addition, she indicated that her teachers at the School of Creative Media had widened her vision and greatly inspired her in artistic pursuits.

Choi Sai-ho graduated with a Master of Fine Arts degree from SCM. Performing under the stage name of S.T., the solo electronic musician and audio-visual performer was ranked eighth among the Top 20 musicians by TimeOut Hong Kong, a respected entertainment magazine. 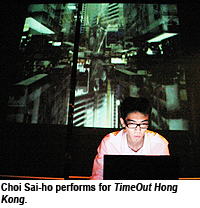 Combining music and video, he was selected as the first Hong Kong musician to join the Red Bull Music Academy 2006. He is now focusing on audio-visual performances, remixes and composing musical scores for independent films.

Choi Sai-ho is a performance-qualified violinist with a good training in classical music received since childhood. He said the diverse SCM programmes have given him a better grasp of visual arts and sharpened his creative skills. "Teachers at SCM have given me strong support and many opportunities, and helped me find my own style of creative work," he said.