High Noon, the first movie directed by City University of Hong Kong (CityU) Creative Media graduate Heiward Mak Hei-yan, will premiere on 6 November. A special screening for CityU staff and students will be held on the same day. Heiward will join the seminar right after the screening.

The film is the Hong Kong episode of the Taiwanese trilogy Winds of September initiated by veteran filmmaker Mr Eric Tsang Chi-wai to nurture young directors. Mr Tsang gave the same script to three young directors from Taiwan, Hong Kong and mainland China respectively and asked each of them to create a movie in their own style and local colour.

High Noon tells the story of nine youngsters taking the Hong Kong Certificate of Education Examination. They are facing a range of challenges in friendship, love and family life, confront threat of death, and take a journey of self-discovery in the course of their search for love and freedom.

“In this era of information overload and with so many social problems, nothing is more important than communication with - and the love of - the people around you and this is one of the key messages in the movie,” said Heiward. 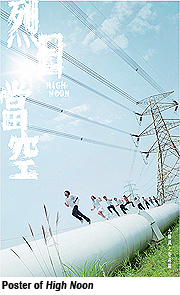 Heiward is only 24 years old and the average age of the main actors and actresses is 17. And they had no acting experience. “This is a movie about youngsters. That is the reason I picked green actors,” Heiward said. “I would like to talk about youth issues through actors who are believably young themselves.”

Heiward started researching the movie when she received the script in the middle of 2007. She conducted street interviews, talked to youngsters, went to the places they hung out and read their blogs.

Heiward is the director and scriptwriter of the movie. She is also one of the editors of the film. The film was finished early this year, just in time to join the Hong Kong International Film Festival in March 2008.

Heiward thanked Mr Eric Tsang for offering her the opportunity to make her first movie. She would also like to thank the School of Creative Media (SCM) and teachers who gave her inspiration and support.

“Patrick (Mr Tam Ka-ming, Associate Professor at SCM) has taught us to hold on to our belief and never give up in our movies. Professors at SCM are not only my teachers, but also my good friends who care about me and encourage me,” Heiward said.

The movie has received much acclaim during screenings, including praise from the famous director Mr Jia Zhangke. “The young actors have given outstanding performances, natural yet powerful. The credit goes to the director who has done so well in guiding the actors.”

Heiward graduated from CityU in 2006. In the same year, she joined the crew of the movie Men Suddenly in Black 2 and worked as one of the scriptwriters and assistant directors. Her final year project, a short film named Lovers’ Lover, received the Gold Award in the Open Category of the 12th Hong Kong Independent Short Film & Video Awards, the International Young Film Makers Award in the 9th up-and-coming Film Festival Hanover 2007, and was an official selection in the 14th Women Make Waves Film Festival in Taiwan.