The evolution of Hong Kong museums was the subject of the academic year’s first City Cultural Salon organised by the Cultural and Sports Committee of City University of Hong Kong (CityU) on 22 September, featuring Dr Louis Ng Chi-wa, Assistant Director (Heritage and Museums) of Leisure and Cultural Services Department.

In his talk entitled “Museums in Hong Kong: traditional, modern and post-modern”, Dr Ng, who currently takes charge of the management of 14 museums across the territory, shared with more than 40 friends and staff members of CityU the evolution of Hong Kong museums over the past century.

Dr Ng divided the development of local museums into three periods: Traditional Period (before 1960s), Modern Period (from 1960s to mid-1990s) and Post-modern Period (after mid-1990s). The three periods were closely related to the development of the local society. During the early colonial days, Hong Kong Government placed particular emphasis on social stability and economic development, but treated nationalism as a taboo and was less concerned about Chinese culture, education and social welfare. 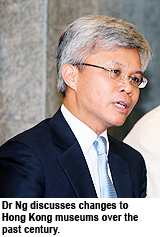 “During the Traditional Period, museums were only regarded as a storage place for cultural works. Take the Old City Hall (1874-1933) as an example, citizens went there not for appreciation of collected items, but to shelter from the sun or rain,” he said.

Only when Hong Kong gradually became a major metropolitan city during the 1980s did the local government begin to pay more attention to the promotion of culture. Most Hong Kong museums were built during that time but they were rather small in scale. “Also during that period, experts played a key role in the administration of museums. Cultural exhibitions usually adopted the approach of teaching the audience without regard for the public’s preferences,” said Dr Ng.

Although Hong Kong does not possess truly world-class collections, Dr Ng pointed out that public interest in visiting museums was on the rise. The number of visitors to local museums jumped from three million in early 2000 to five million last year. In response to this, the Government is going to dedicate more effort to research, education and promotion, aiming to enhance public interest in the conservation of cultural works. 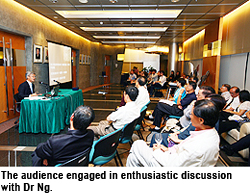 After the talk by Dr Ng, the audience raised various points and opinions, including the attitude of young people towards museums and cultural works, the interest and editorial focus of the media, and the development of West Kowloon Cultural District.

Professor Cheng Pei-kai, Chairman of the Cultural and Sports Committee and Director of Chinese Civilisation Centre, thanked Dr Ng for his talk and Professor Way Kuo, CityU President, and other guests for attending the event. “City Cultural Salon promotes culture and the arts and provides a platform for exchanging ides,” said Professor Cheng. “It was encouraging to see such enthusiastic participation and expression of different ideas.”