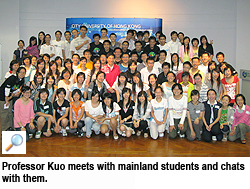 Professor Kuo praised the mainland students as smart, mature and hardworking. He understood that most had left their families for the first time and were learning how to live independently. He encouraged students to seek help from teachers and schoolmates whenever they encountered problems. Students should also help each other in difficult times, he added.

“Hong Kong is a melting pot of eastern and western culture. I hope that when students learn about western culture, they also try to figure out how eastern culture merges with it,” Professor Kuo said. 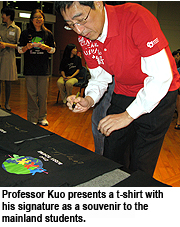 Professor Kuo not only listened to students discussing their lives at CityU but also participated in games aimed at helping students understand more about Hong Kong and the University. He then presented a t-shirt with his signature as a gift to the winning team.

CityU has recruited about 190 high quality mainland students, including those from Sichuan and minority ethnic groups. Students said they were coping with the University and their new lives in Hong Kong.

Peng Lingman, a student of the Faculty of Business, originated from Hunan and belongs to the Tujia ethnic group. She said this was her first time in Hong Kong and at first she encountered some problems but CityU had provided a well-compiled plan to help students tackle them. She said the facilities were well equipped and the atmosphere at the University was good. She added she was enjoying the new environment, having been here for one month. 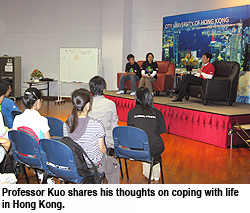 different kinds of activities, such as inviting organisations to give talks and conducting local tours for the mainland students to learn more about Hong Kong. The INSO staff also taught the students how to communicate with their parents. “This is the first time I have left my family and I miss them so much. My parents also feared that I could not cope with life in Hong Kong. When I talk with them, I try to keep them informed and allay their fears,” Peng Lingman said.

Zeng Guangming from Chengdu, Sichuan, is also a student of the Faculty of Business. He said that after the earthquake he learnt to treasure all opportunities. Whenever he encounters problems, he will try to find solutions. He thanked CityU for helping students adapt to the new environment through participation in various activities. He also thanked his roommate for helping him to overcome the language barrier.

“I am very lucky that my roommate is a local student. Apart from telling me details of life at CityU, he also taught me to speak Cantonese. In return, I taught him Mandarin. Our friendship has grown and I think I will soon be able to communicate with the local people in Cantonese,” Zeng Guangming said.