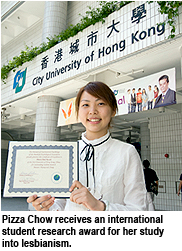 A psychology research paper by Pizza Chow Ka-yee, a recent Applied Social Studies graduate of City University of Hong Kong (CityU), received the Award of Excellence in the 2008 Student International Research Awards organised by Division 52 (International Psychology) of the American Psychological Association (APA). Pizza was the only undergraduate among the three award-winning students.

In her research paper, Self-stigma, Homosexual Identity and ‘Coming Out’: A Comparative Study of Lesbians in Hong Kong and Mainland China, Pizza investigated how publicly “coming out” was influenced by perceptions of shame, stigmatisation, homosexual identity and expected social support from family and friends.

Pizza conducted a survey questioning 231 lesbians from Hong Kong and 199 from mainland China from January to May 2008. After analysing the data, she found that shame devalued one’s perception of their homosexuality, which in turn reduced the likelihood of publicly revealing their sexual preference. Similar results were recorded between the two survey samples.

Pizza said the similarities between Hong Kong and mainland China reflected traditional Chinese values. “Westernisation has a superficial influencing on Hong Kong people’s daily lives and habits but not their deep-rooted cultural characteristics and mindset,” said Pizza. “Both Hong Kong and mainland Chinese lesbians believe that any behaviour that deviates from the norm is regarded as publicly unacceptable.” 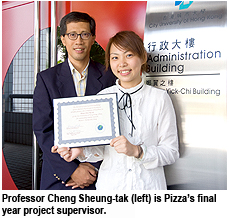 The research evolved from Pizza’s final year project, in which she investigated Hong Kong lesbians. Her supervisor, Professor Cheng Sheung-tak, Department of Applied Social Studies, encouraged her to expand her research to include lesbians in mainland China. Professor Cheng said Pizza is a diligent student and who has achieved excellent results in an international competition usually dominated by graduates.

Pizza found the study’s subjects choose to talk to their friends in preference to family members. More than 90% indicated they did not confide in fathers or brothers. Only 60% ‘came out’ to family members, while 95% disclosed their sexual orientation to friends. The results show Hong Kong lesbians believe relationships between friends are less inhibited by social mores. Friends tend to be more tolerant of homosexuality than parents.

Pizza experienced difficulty finding subjects since many lesbians did not publicly disclose details of their sexuality. She spent five months collecting data through her personal network and lesbian websites and organisations.

APA, a US-based scientific and professional organisation with 150,000 members, is the largest association of psychologists in the world.