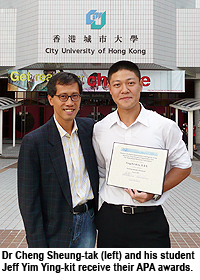 A graduate and a teacher from City University of Hong Kong (CityU) have won major international awards through the American Psychological Association (APA).

Jeff Yim Ying-kit won the Student Award for Completed Research (Undergraduate) from the Division 20 (Adult Development and Aging) for his research on "Age and Forgiveness". Jeff, a 2007 graduate of the BSocSc (Hons) Psychology degree programme, is the first Hong Kong student to receive such honour.

Further to the good news, his teacher

Their awards testify again the level of international recognition for the achievements by CityU students and academic staff.

Jeff's winning research is about the implication of age on forgiving others. Using a questionnaire, he interviewed 89 young people aged between 18 and 23, and 91 elderly people between the ages of 61 and 92. He conducted the interviews in universities and elderly homes, respectively. The interviewees were randomly divided into three groups and they were asked how they felt when they were hurt by others.

To answer the survey questions, the first group of interviewees had to assume they would live 20 years longer than their natural life span; the second group that they would migrate alone to another country within a few weeks and would have only a very short time to see relatives and friends; and the third group that everything stayed the same.

The survey results showed that elderly people were more forgiving than young people. In addition, compared with the group with a longer life and the group with the status quo, the group who had a shorter time to see relatives and friends was more inclined to forgive others.

This was the first time the APA accepted entries from students from countries outside the US, making it a truly international contest. "I hope that by winning this award I can show more people the strengths of Hong Kong students," Jeff said.

Jeff, now receiving training at the Police College, said his psychology knowledge helped him to understand more easily human behaviour and motivation, a great help for his future career. He said he hoped to join the police psychology service unit.

"I am very grateful to Dr Cheng for his encouragement and supervision," Jeff said. "I was inspired to do my research after reading his reports on age and the psychology of elderly people."

Dr Cheng has been studying ageing issues for many years. "The research results have proved the psychological theory about the impact of time on the physical and mental health of elderly people. It is hoped that the results can contribute to dealing with the global ageing problem," he said.

APA, a US-based scientific and professional organization with 150,000 members, is the largest association of psychologists worldwide.