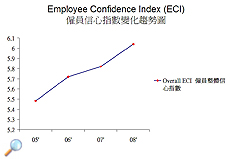 An optimistic Hong Kong workforce believes the overall job market and career prospects have improved, according to a survey conducted by the Department of Management at City University of Hong Kong (CityU).

The Employee Confidence, Industrial Relations and Employee Commitment Survey 2008 was conducted in March. A total of 815 Hong Kong citizens in full-time employment and aged 18 or above were interviewed by telephone. They were asked to express their views on employment confidence, industrial relations and work commitment.

The annual survey, one example of CityU’s numerous applied research efforts, has been conducted since 2005. It is aimed at improving understanding of how Hong Kong employees view different aspects of their jobs. The findings can assist employers in devising corresponding human resources policies.

Compared with the previous two years, respondents believe the overall job market has improved. The average scores from 2006, 2007 and 2008 are 4.22, 4.49 and 5.05 respectively, with the higher number indicating greater confidence in the prospect of finding a new job.

The Employees Confidence Index (ECI) is measured on a scale of 0 to 10, representing ascending levels of confidence in terms of “Well-Being”, “Job Security”, “Job Prospects” and perceptions of the overall job market. Compared with last year, employees’ confidence had improved. The ECI mean increased by 0.22 to 6.04, suggesting Hong Kong workers had more confidence in their prospects of finding a better job. Employees in the Transport, Storage & Communication (5.28) and Construction (5.73) industries reported the lowest confidence levels, while those in Financing, Insurance, Real Estate & Business Services (6.38) reported the highest.

Compared with last year, there have been no significant changes in “Well-Being” and “Job Security”. Respondents were mostly satisfied with their relationships with colleagues (7.67) and were optimistic about job performance (7.26). Confidence in career prospects within respondents’ employment increased noticeably, from 4.11 to 4.59. 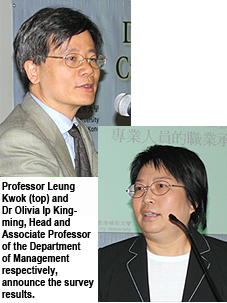 Professor (Chair) Leung Kwok, Head of the Department of Management and principal investigator of the survey, said the economic climate had a direct influence on employees’ confidence. “The local economic climate has been improving in the last few years. Employees are more optimistic about the market and therefore their confidence in finding a better job and having good career prospects is higher,” he said.

The Industrial Relations Index (IRI) is measured on a scale of 1 to 5. A higher score represents a more positive view of industrial relations. The latest survey shows that industrial relations in Hong Kong have been stable during the past three years. The IRI for employees in Import & Export Trades (3.44) and Community, Social & Personal Services (3.44) were the highest, whereas the lowest level was registered by employees in Transport, Storage & Communications (3.25).

Generally speaking, employees with the least seniority, highest age and lowest education and skill levels, scored worst in the ECI and IDI. The survey results suggest employers could consider providing more training to these employees to improve the situation.