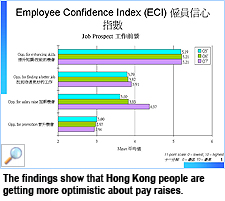 The Department of Management at City University of Hong Kong (CityU) announced the findings of the Employee Confidence, Job Satisfaction and Age Discrimination Survey 2007 on 28 May. The findings show that Hong Kong people think that the overall job market has improved and that they are getting more optimistic about pay raises.

The survey was conducted in March and April 2007. A total of 805 Hong Kong citizens in full-time employment and aged 18 or above were interviewed by phone. They were asked to express their views on employment confidence, job satisfaction and age discrimination.

The annual survey, an example of CityU’s applied research efforts, has been conducted since 2005. The aim is to understand how Hong Kong employees feel towards different aspects of their jobs. The findings are useful for employers to devise corresponding human resources policies. 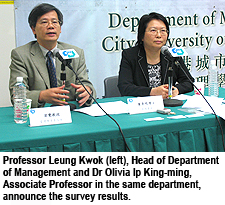 The Employees Confidence Index (ECI) has a scale of 0 to 10 representing ascending levels of confidence in terms of “Well-Being”, “Job Security”, and “Job Prospects” and perceptions of the overall job market. Compared with the previous two years, respondents think that the overall job market has improved (average scores of 2005, 2006 and 2007 are 3.87, 4.22 and 4.49 respectively), i.e. people think finding jobs is easier this year than in the previous two years.

Despite the improving job market, employees’ confidence is only moderate, with the ECI mean increasing by 0.1 to 5.82, suggesting people still lack the confidence to find a better job. The confidence of employees in the restaurants and hotel (5.59) and manufacturing (5.62) sectors are the lowest, while that in the wholesale and retail sector (6.04) is the highest.

Compared with last year, there are no obvious changes in “Well-Being” and “Job Security”. Respondents are mostly satisfied with their relationships with colleagues (7.53) and are optimistic about maintaining their positions (7.15). Their confidence in the opportunity for salary raises, however, has increased noticeably from 3.83 to 4.37.

“Employers have to find ways to retain quality employees and raising salary is the most direct measure,” said Dr Olivia Ip King-ming, Associate Professor of the Department of Management.

A scale of 1 to 7 was used to measure “Well being” and job satisfaction, including salary, fringe benefits and working hours, and other aspects. The findings show that employees tend to have a high overall job satisfaction (average score 4.93), a figure that has decreased 0.1 from last year. They are satisfied most with their relationships with their colleagues (5.45) and superiors (4.77), but dissatisfied most with promotion (3.22) and training (3.33).