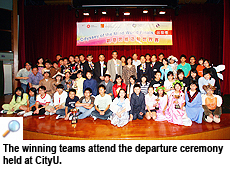 City University of Hong Kong (CityU), the Education Bureau and the Hong Kong Federation of Youth Groups jointly organised the 2008 Hong Kong Odyssey of the Mind Competition. The six winning teams will represent Hong Kong in the world titles to be held at University of Maryland in the United States to compete with more than 800 teams from 17 countries and more than 40 US states. A departure ceremony was held for the winning teams on 10 May at CityU. 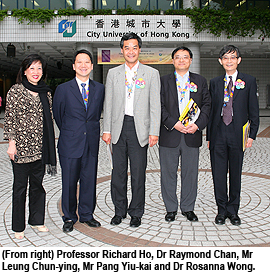 The 2008 Hong Kong Odyssey of the Mind Competition was held on 29 March, with the participation of 112 teams from 24 primary schools, 65 secondary schools and four youth centres. More than 40 CityU students worked for the competition as adjudicators, volunteers and technicians, highlighting CityU’s emphasis on promoting creativity among local youth.

Professor Lilian Vrijmoed, CityU’s Dean of Student Learning, said the University had been a strong advocator of creative education and the competition could help develop the creativity of primary and secondary school students. “CityU students showed their enthusiasm by participating in the competition as adjudicators, volunteers and technicians. I believe the unlimited creativity of school children will serve as tremendous inspiration for CityU students,” said Professor Vrijmoed.

Yonnis Choy Wai-man, Year 3 student at the Department of Physics and Materials Science, said she had previously participated in the competition as a secondary school student and acted as an adjudicator this year. Whereas she had only focused on solving her own team’s problems in the previous competition, she had to examine the solutions of all participating teams this year. It illustrated to her the fact there were different approaches to tackling a problem.

“I also found that creativity is not necessarily directly related to age. A 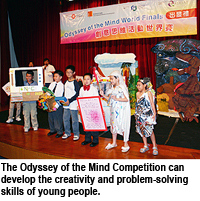 primary school team showed a very creative way to solve the problems and surprised all the adjudicators,” said Yonnis.

Originating from the United States, the competition is a valuable activity for developing the creativity and problem-solving skills of young people through teamwork. They are required to solve a series of challenging open-ended questions to help them expand their creative thinking prowess and confidently articulate their original ideas.