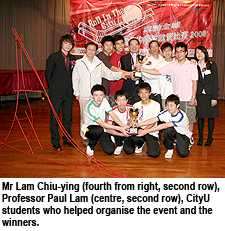 Applying creativity to physics, more than 180 secondary school teams from Forms 1 to 7, representing more than 100 Hong Kong and Macau schools gathered at City University of Hong Kong (CityU) to construct launchers to propel a ball with the straws provided on 27 April.

The Hong Kong and Macau Inter-school Straw Competition 2008 - Roll in the City, organised by CityU’s Physics and Materials Science Society of the Students’ Union, set out to arouse secondary school students’ interest in physics through real-life applications, strengthen their sense of team spirit and provide a forum for exchange between students from different schools. 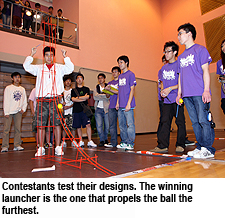 The competition was divided into junior and senior categories, both of which offered championship, runners-up, merit and best design awards. The contestants were given nothing more than 100 pieces of straw, a roll of string and instructions to construct a launcher within 90 minutes. The launcher that propelled the ball the furthest was the winner. Each champion team was awarded a HK$1,500 book coupon and trophy. Second and third placegetters received a HK$1,000 and HK$500 book coupon, respectively. 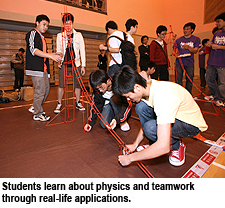 The Faculty of Science and Engineering and the Department of Physics and Materials Science acted as consultants for the event. “The competition helps secondary school students apply their knowledge of physics and materials science to creative designs,” said Dr Jonathan Chung Chi-yuen, Associate Professor of CityU’s Department of Physics and Materials Science. “This year we have placed more emphasis on encouraging creativity and interaction among participating teams,” he added.

The competition served as an important platform for CityU students who helped organise the event to strengthen their organisational, leadership and analytical skills. “We have learnt about time management as we have had to take care of everything, ranging from defining the theme, preparing the entry invitation and planning the prize presentation — all while concentrating on our studies,” said Yip Yam-hon, Vice-president (External) of the Physics and Materials Science Society. “We have built up our confidence by organising the competition,” added Tong Yi-han, the Society’s President.

This is the eleventh year of the annual event, which has a dedicated theme each year. Past years included “aeroplane”, “trebuchet”, “flying soft drink cans”, “robots” and “water wheel”. The competition has been well-received by secondary schools since its launch.