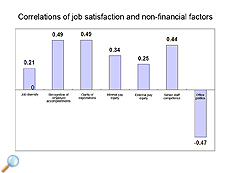 Hong Kong employees are more satisfied with their job when their accomplishments are recognised and supervisors clearly outline their expectations, according to a survey conducted by the Department of Management (MGT), City University of Hong Kong (CityU).

The survey, Implications of Non-financial Factors for Job Satisfaction, initiated by MGT, involved telephone interviews from mid-March to mid-April with 607 Hong Kong citizens aged 18 or above and in full-time employment. The interviewees were asked to indicate their attitudes towards non-financial factors affecting their job satisfaction, and the influence of office politics on their work.

The results were announced on 6 May at a breakfast seminar entitled Building and Retaining an Engaged Workforce: Effective Non-Financial Strategies. Conducted by Dr Jenny Lee Shu-yee and Dr Eddie Yu Fu-keung, Associate Head and Associate Professor of MGT respectively, the survey is an example of the University’s focus on applied research. The survey, on a scale of 1 to 5 representing ascending levels of agreement, tracked the impact of non-financial factors on job satisfaction, including views on office politics. 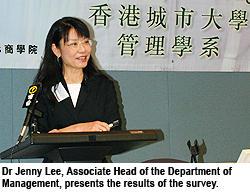 The survey also examined differences in job satisfaction among employees working for different types of organisations. Employees in small organisations (SMEs) reported the highest satisfaction rating (mean=3.29) compared to those in international firms, who reported the lowest (3.17). Employees working in small organisations reported that they received a high level of recognition for their accomplishments, had clear job expectations placed upon them and enjoyed internal pay equity. They were, however, critical of the low level of job diversity. In a comparison of family and non-family businesses, employees in family businesses enjoyed better job diversity but the survey found they were more negatively affected by office politics.

Employees in general reported that office politics wielded the greatest influence over job satisfaction (3.12). The survey found an unwillingness to oppose powerful departments (3.07). Office politics were most influential on employees in international firms (2.95) and least on those in government or non-profit organisations (2.84). 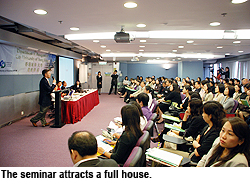