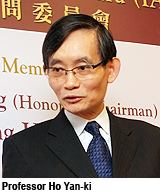 The School of Law (SLW) at City University of Hong Kong (CityU) has invited three distinguished experts to join the International Advisory Board (IAB). Dr Xiao Yang, former President of the Supreme People's Court, is appointed as the Honorary Chairman of IAB, the Hon Sang-hyun Song, Judge of the International Criminal Court in The Hague, and Mr George Tam Siu-ping, Principal of Wah Yan College Hong Kong, are appointed as the members of IAB.

A conferment ceremony was held on 6 May.

Their expertise in the legal and education fields enhance the quality of teaching and research at the School, further exemplifying CityU's dedication to nurturing students with the requisite knowledge of the globalised world.

Professor Richard Ho Yan-ki, Acting President of CityU, said the appointments were very significant as they highlighted the University's societal and international connections. "It does not simply signify that CityU is interconnected with universities beyond Hong Kong. This interconnectivity reaches into the local community," he said.

Educating the public to have an awareness of the rule of law is one of the School's major roles, said Professor (Chair) Wang Guiguo, Dean of the School of Law. "A central feature of Hong Kong is that it is a society governed by rule of law, so we need the guidance of lawyers and judges. At the same time, society must provide the right environment for this to happen. Our job is to build this environment in which the rule of law can flourish,"said Professor Wang. 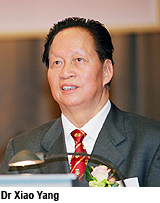 Dr Xiao Yang, the former Chief Justice and President of the Supreme People's Court of the People's Republic of China, has also served as Procurator-General of the Guangdong Provincial People's Procuratorate, Deputy Procurator-General of the Supreme People's Procuratorate, and Minister of Justice. While serving as the Minister of Justice, Dr Xiao reformed the system, successfully transforming the status of lawyers from legal workers to legal practitioners who serve the needs of the country. He set up the first criminal reporting centre for the general public, the first bureau dedicated to fighting corruption and established a legal aid system in China. He also masterminded reform of the prison system. Dr Xiao was conferred Honorary Doctor of Laws at CityU in 2004. 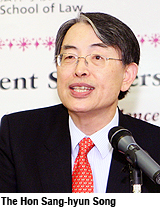 The Hon Sang-hyun Song is a Judge in the International Criminal Court at The Hague, The Netherlands. He was elected for a three-year term from the Asian Group of States and has been assigned to the Appeals Division since 2003. He was Professor of Law at Seoul National University from 1972 to 2007. As a member of the advisory committee to the Korean Supreme Court and Ministry of Justice, he participated in the reform of the national litigation system and in particular of its Penal Code, and the Court Rules of Criminal Procedure and criminal court processes. 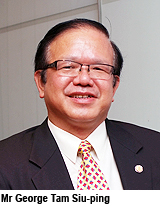 Mr George Tam has been the Principal of Wah Yan College Hong Kong since 1996. He has served Hong Kong education for more than thirty years, and has been active in helping to formulate the Grant Schools Council's role in implementing the 3+3+4 policy of secondary and post-secondary education.

The IAB was formed in 2007, comprising renowned professors from Harvard, Yale and Oxford universities and experienced legal practitioners, to help the School cope with the challenges of a globalised legal education environment. The IAB held its inaugural meeting and a roundtable discussion on "Globalisation and Legal Education" last year.

Chairmen of the IAB include:

· Dr Simon Ip Sik-on, a solicitor, educator and a notary public who has served as number of local tertiary institutions. He was a legislative councillor (1991-1995) and President of the Law Society of Hong Kong (1987-89);

· Dr Michael J Moser, an attorney-at-law and a partner with O’Melveny & Myers LLP, has been named among the top 500 lawyers in the Asia-Pacific region by Asia Pacific Legal 500.

Other board members include:

· Mr Philip Dykes SC, a practicing barrister (Senior Counsel) in Hong Kong who was elected Chairman of the Hong Kong Bar Council in 2005 and 2006;

· Professor Timothy Endicott, Professor of Legal Philosophy and Dean of the Faculty of Law, University of Oxford;

· Professor Gerard McCoy, Adjunct Professor at the University of Canterbury in New Zealand;

· Professor Christopher McCrudden, Professor in Human Rights Law in the Faculty of Law, University of Oxford;