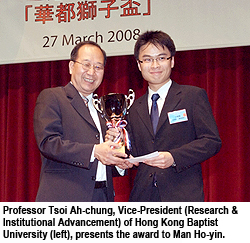 The contest, held on 27 March, was aimed at boosting the communication skills and language proficiency of students. Eighteen students from nine tertiary institutions took part in two categories, English and Cantonese. In Man Ho-yin's chosen category, Cantonese, Impromptu Speech, he was only given his designated topic minutes before the contest begun. His subject was "The impact on Hong Kong of three modes of direct transport links between mainland China and Taiwan". Courtesy of his outstanding public speaking skills and steady on-stage performance, Man Ho-yin was named runner-up.

Man Ho-yin said being a contest representative of CityU was a valuable experience. To take part, he needed first to perform well in an internal competition held by the University in order to be selected for public speaking training by Student Development Services (SDS). Another round of internal competition was then held, from which two students were selected to represent CityU in the English and Cantonese categories of the contest.

Man Ho-yin said his teachers at the School of Law were focused on whole-person development and always encouraged students to express opinions in class and to keep abreast of current affairs. "I am excited to have done well in the competition. Taking part not only enhanced my communication skills but also taught me to study issues from various angles," he said.

Mr James Leung Sing-chung, Senior Counsellor of SDS, was responsible for coaching students on public speaking. In addition to public speaking skills, Mr Leung also provided training on delivering an impromptu speech. "As there is no way to pre-prepare material in this format, I taught students some basic models to analyse topics and discussed current affairs with them in a bid to enhance their awareness of major world issues," said Mr Leung. He encouraged students to join the City Toastmasters Club to improve their public speaking skills and logical thinking.