Showing her talent in English public speaking, Joanna Cheung On-yu, a year-two student in the School of Law of City University of Hong Kong (CityU), was the first runner-up in the English stream of the Fifth Inter-university Speech Contest— “Metro Lions Cup”. The aims of the competition are to promote students’ interest in public speaking and to boost their language proficiency and communication skills. 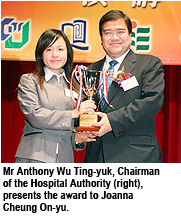 A total of 17 contestants, representing nine local tertiary institutions, participated in the English and Chinese public speaking competitions on 20 March. The topic for the English group was “The Future of Hong Kong’s Health Care System”.

Joanna said she benefited from taking a deep look at the health care system in preparation for the contest. “As a law student, I need not only to study the legal system but also to expand my vision,” she said. “The competition will no doubt be a great help to my future career in the legal sector.”

She said her law classes and practical classroom exercises had not only enabled her to acquire legal and professional knowledge but had also enhanced her communication skills.

“I felt really proud and honoured when I knew I won an award,” she said. “I wish to sincerely thank Mr James Leung Sing-chung of Student Development Services, who was my coach for this competition. Without his patient coaching, I would not have been able to receive this honour.”

“Public speaking is very useful practice for students,” Mr Leung said. “With a talent in speaking and good communication skills, one could easily become an eloquent speaker.”

Mr Leung founded City Toastmasters Club soon after he joined CityU to train students in public speaking skills. Established for more than 10 years, the Club organizes two gatherings a month for students to practise their public speaking in a happy and relaxed atmosphere.