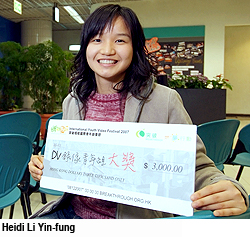 Heidi Li Yin-fung, a Year 2 creative media student at City University of Hong Kong (CityU), was crowned champion in the youth DV category in the International Youth Video and Photography Contest for her production entitled Can I Sit Beside You.

Heidi majored in "Moving Image: Live Action" at the School of Creative Media (SCM). She said SCM taught students comprehensively the technical aspects of video shooting and provided the latest and most advanced production hardware and software to enhance their creativity. The award illustrates that CityU is devoted to nurturing high-calibre talent for the creative industry in Hong Kong and the region.

Heidi joined the competition to gain more experience and learn where her strengths lie. "The award is immensely satisfying and equally unexpected. I will work hard to further enhance my shooting and editing techniques in order to pursue a career in film production," Heidi said. 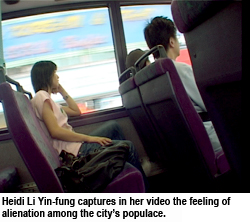 From preparation to post-production, Heidi only had one month to work on this project. She was thankful for her classmates, valuable contributions throughout the production, particularly the soundtrack created for the video. She believed that her success was due to the practical knowledge she learnt from SCM teachers who helped her capture the essence of the theme of the contest: "City and Me - Collective Dreams".

Heidi captured in her video the feeling of alienation among the city's populace. She made use of the images of social interactions, such as people on public transport keeping a distance from strangers, to provide materials and room for the viewer to reflect on these situations and find a way to reduce social alienation.

The International Youth Video and Photography Contest, organised by Breakthrough, was open to youngsters aged 15 to 25.