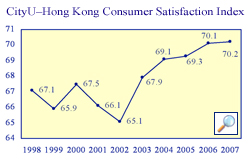 Consumer satisfaction in 2007 hit a record high of 70.2, up 0.1% from 2006 with a considerable drop in the Food & Drink category, according to a survey conducted by the Department of Management Sciences at City University of Hong Kong (CityU).

CityU-HKCSI is a performance indicator for Hong Kong businesses, measuring consumer satisfaction with the quality of locally-sold products and services.

Consumer satisfaction of products in the Food & Drink category dropped 3.6%, from 72.5 to 69.9, due largely to the significant decline in satisfaction with the service of fast food shops and cafes and Chinese and Western restaurants. 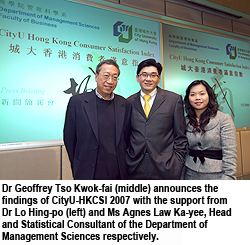 “The continuing upward trend of CityU-HKCSI observed since 2002 has slowed this year because of a decrease in consumer satisfaction with food and drink items that cancelled out the sizeable increase in satisfaction within the Housing & Related Items category,” said Dr Geoffrey Tso Kwok-fai, an associate professor in the Department of Management Sciences.

“Consumers are significantly less satisfied with their Food & Drink items, such as fast food shops & cafes, restaurants, rice, fresh seafood, fresh meat and oil. This is due largely to rising prices and for some products, a perceived deterioration of quality,” he added.

Results showed that Hong Kong people were most satisfied with Transport services and products (73.4), considering them to have the highest quality and most reasonable price relative to quality.

This was followed by Clothing & Personal Care and Information & Entertainment products (each at 72.3). Housing & Related Items remained the lowest scoring category (68.5) but had narrowed the gap with those ranked higher.

Rice had been among the ten best performers for many years but in 2007 it experienced the second biggest decline (-4.9%). The fall of rice from the top ten was due to consumer dissatisfaction with its actual quality and the quality/price ratio.

Four categories have consistently occupied the top positions over the past four years. They were music CDs, dairy products & non-alcoholic drinks, postal services and jewellery. The five worst performers since 2004 were shopping in Shenzhen, job-seeking magazines, public housing rentals, real estate agents and entertainment in Shenzhen.

This year’s study also included additional questions on participation in investment options. A total of 6,426 interviewees were asked to indicate whether they were involved in investment activities. Almost 70% of respondents claimed they did not make any investments. About 30% invested in the stock market and 10% in management funds (excluding the MPF scheme).

Most of the 6,426 interviewees (64.4%) were from the low income group, with monthly income less than $10,000. A higher proportion of wealthy respondents, with monthly income of $40,000 or above, invested in the stock market. The median of the respondents’ expected annual rate of return was 10%, indicating they were non-aggressive investors.

CityU-HKCSI has conducted more than 140,000 computer-assisted telephone interviews since 1997, with more than 10,000 interviews carried out each year.