Consumer satisfaction has reached an all time high since the handover in 1997, with considerable improvements in Clothing & Personal Care and Food & Drink products, according to a survey conducted by the Department of Management Sciences at City University of Hong Kong (CityU).

The findings of the CityU-Hong Kong Consumer Satisfaction Index (CityU-HKCSI) 2006 survey showed that the index hit a record high of 70.1, up 1.2% from 2005. The study also covered the habit of Hong Kong people visiting and shopping in mainland China, which showed that 20% of the respondents were more satisfied with their consumption in China than in 2005.

CityU-HKCSI, an example of the University’s applied research, is a performance indicator for Hong Kong businesses. It measures consumer satisfaction with the quality of locally-sold products and services. 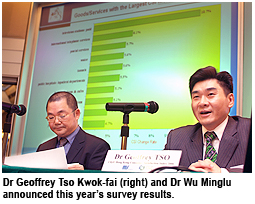 The index uses a scale of 0 to 100 to represent ascending levels of consumer satisfaction. “Its readings from 2001 to 2006 were 66.1, 65.1, 67.9, 69.1, 69.3 and 70.1, respectively, indicating a continuing upward trend over the last four years,” said Dr Geoffrey Tso Kwok-fai, an associate professor in the Department of Management Sciences, “This is a consequence of the gradual economic recovery. As a result, people in Hong Kong are generally more optimistic.”

Conducted for the 10th consecutive year, the study has interviewed 14,000 people this year. Results showed that Hong Kong people were still most satisfied with Clothing & Personal Care (73.8) products, considering them to have the highest quality and most reasonable price relative to quality.

This is followed by Transport services (73.5) while Housing & Related Items scored the lowest (66.0), the only category that reported a decline (-1.0%).

Of the 68 major goods and services covered in the study, pay TV services experienced the greatest improvement (10.7%) in consumer satisfaction, although consumers were still dissatisfied with the services (68.2, ranked 58th out of the 68 goods and services).

Compared to last year’s experience, 20.7% were more satisfied with their consumption in China, 13.7% less satisfied, and the majority (65.5%) equally satisfied. With respect to whether or not the overall service quality (disregarding product quality) in mainland China is catching up with that in Hong Kong, there was no significant difference in the responses. The percentages of positive and negative answers were 45.4% and 45.3%, respectively.

The CityU-HKCSI survey covers 68 commodities and services which are categorized into Clothing & Personal Care, Food & Drink, Housing & Related Items, Transport, Information & Entertainment and Non-Consumer Price Index (Non-CPI) Items. The categories, accounting for over 75% of the weightings in the Hong Kong composite Consumer Price Index, have been taken into account in calculating the CityU-HKCSI.