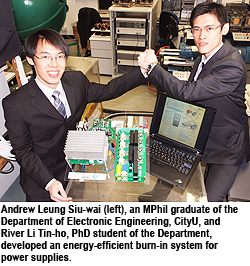 River Li Tin-ho and Andrew Leung Siu-wai, students of the Department of Electronic Engineering, won the Gold Award and the Certificate of Merit (Best Social Responsibility) for an energy-efficient burn-in system for power supplies, developed under the guidance of Professor Henry Chung Shu-hung, Associate Dean of the Faculty of Science and Engineering.

Applying the concept of reusing electricity, the system is expected to save 70% of electricity used in the traditional burn-in process, as well as to lower production costs for power-supply manufacturers and push back the frontiers for developing technology for recycling electricity.

Initiated and sponsored by Astec Limited, a manufacturer of AC/DC power supplies, River and Andrew began working on ways to develop an energy-efficient burn-in system under the guidance of Professor Chung in 2002. The project obtained sponsorship from the Hong Kong SAR Government’s Innovation and Technology Fund, under the Innovation and Technology Commission, in 2004. A prototype system was developed in 2005 and operational tests were conducted at Astec in 2006.

River, now a PhD student, is still doing research on the system and would like to make it applicable in more circumstances. Andrew graduated with an MPhil in 2007.

“I have not only acquired knowledge of electronic engineering in CityU, but also become aware of striking a balance between technology and environment,” River said. “Inspired by Professor Chung, I understand more about the importance of saving energy. While technology provides us with convenience, it may harm the environment around us.”

Other honours went to the Department of Computer Science. Graduate Jacky Chan Chun-pong won the Bronze Award and the Certificate of 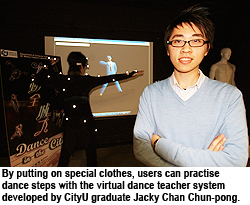 Merit (Best Development) for a dance education system he developed as a final year project for his bachelor’s degree. Using motion capture technology, the system helps students practise popular dancing steps, such as Latin and Hip Hop, by pointing out their errors and giving suggestions for improvement.

“The computer dance games you find in the market only give general scores on the players’ dancing. Therefore, I decided to develop a self-learning system for dancing, where players could see how they move and learn how to improve,” Jacky said.

He thanked Dr Howard Leung Wing-ho, Assistant Professor, for his guidance and help in solving the technical problems. To help people understand more about their learning progress, Jacky is now doing research on adding evaluation of the beat to the system.

Li Ka-ki and Jeff Tang Kai-tai won a Certificate of Merit (Social and Spiritual Wellbeing) under the Best Lifestyle category for a web-based Chinese Handwriting Education System they developed for children, also under the guidance of Dr Leung.

The system allows children to practise writing Chinese characters online using a handwriting input device and gives the children immediate feedback on whether they have written the characters correctly.

Ka-ki has graduated with his bachelor’s degree, and Jeff is now an MPhil student.

The Hong Kong ICT Awards were established in 2006 to recognize, promote and commend excellent achievements and contributions of Hong Kong ICT professionals and organizations. The Government Chief Information Officer is Chairman of the Organizing Committee of the Awards, which were created with the support of the Hong Kong SAR Government.

The award presentation ceremony was held today (21 January) at the Hong Kong Convention and Exhibition Centre. The ceremony was officiated by the Financial Secretary Mr John Tsang Chun-wah.