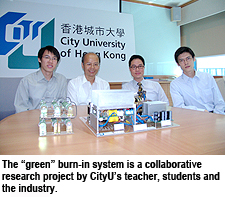 A research team of the Department of Electronic Engineering, City University of Hong Kong (CityU), has developed an energy-efficient burn-in system for power supplies applying the concept of reusing electricity. The system is expected to lower production costs for power supplies manufacturers and save energy.

Electronic appliances like notebook computers and chargers for cell phones need a power supply to convert alternate current (AC) from the socket into direct current (DC). Before a power supply goes to the market, it has to go through the process of “burn-in”, a process which stabilizes newly-produced power supplies and enables them to operate within a time span. This process, however, wastes a large amount of electricity. 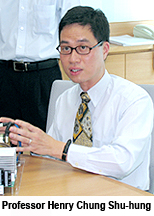 “The conventional burn-in process connects resistors at the output of power suppliers in order to simulate the load condition, thus converting electrical energy passing through the resistors into heat energy. Not only does this process waste electricity, it also raises room temperature in manufacturing plants. This, in turn, entails installing costly ventilation systems to release the excessive heat,” Professor Henry Chung Shu-hung of CityU’s Department of Electronic Engineering said.

Professor Chung further explained the consumption of energy of the burn-in process. “For instance, if you put 200 50-watt power supplies for notebook computers through a burn-in test for 10 hours, you will consume 100 kilowatts of electricity, which is equivalent to the amount of electricity a three-member household uses on average over three days, and the room temperature will be raised to 40 to 50 degrees Celsius,” he said.

To solve this problem, Professor Chung applied the idea of “recycling electricity”. With the support of his research students, he has developed a “green” burn-in system which can recycle 70% of electricity used in traditional burn-in process. 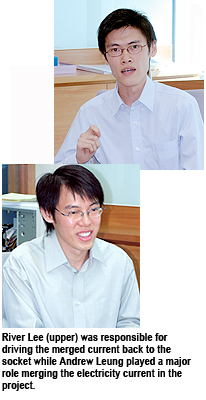 The “green” burn-in system can be used for other electricity tests, such as battery tests in battery factories and power generators in power plants. A veteran researcher in the field of solar energy, Professor Chung plans to use solar energy in further developing the burn-in system.

This recycling energy project was initiated by the power supplies manufacturer Astec Ltd. Two Year 2 students from CityU’s Faculty of Science and Engineering, Andrew Leung Siu-wai and River Li Tin-ho, became involved in the project through the Faculty’s Industrial Attachment Scheme (IAS) in 2002. They were then placed on a one-semester internship during their final-year studies with Astec through the Faculty’s Cooperative Education Scheme (CES). In 2004, the project obtained sponsorship from the Government’s Innovative Technology Fund, under the Innovation and Technology Commission. Eventually, the teacher/student team succeeded in developing a prototype in 2005. It was piloted with Astec last year. 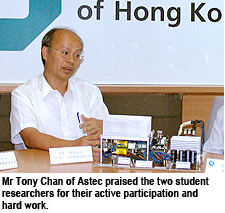 According to Mr Tony Chan Kee-ming, Astec’s Senior Failure Analysis Manager, most manufacturing factories have been moved to the mainland and operate under restrictions due to power shortages. The development of an environmentally friendly burn-in system was thus very much needed by Astec, a power supply manufacturer on the mainland which consumes a huge amount of electricity everyday. “That was why we invited Professor Chung and his students to join the research through CityU’s Industrial Attachment Scheme,” Mr Chan said.

Mr Chan praised the two student researchers, who have recently obtained their master’s degree, for their active participation and hard work, noting that they sometimes worked until late at night. Andrew Leung landed a job with Astec supporting the company’s burn-in system, while River Lee will do a PhD under the supervision of Professor Chung.

Mr Chan said IAS and CES were both advantageous to the industry. “We have a large team of design engineers, but they are usually occupied with clients and cannot afford the time to do in-depth research. So these two schemes allow CityU academics and students from different disciplines to bring to us their highly useful expertise in fields like material science and mechanical engineering, both of which are very important to us,” he said.