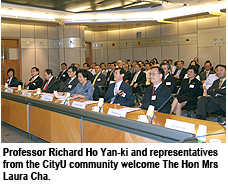 In his talk about the challenges facing Hong Kong and CityU, Professor Ho said CityU was a university that turned students into professionals and carried out applied research which had an immense impact on the community. “But at CityU, turning students into professionals implies more than educating students for specific jobs. It also means developing their mental alertness and aptitude,” he said.

The world is changing rapidly, Professor Ho said. “As a forward-looking university, CityU hopes to train students to be ‘change professionals’, that is, professionals who are capable of anticipating and harnessing changes.” In addition to acquiring job specific skills, students will develop a set of generic skills such as synthesis, integration, problem solving and ‘big picture thinking’, he added.

Despite its economic success, Hong Kong lacks talented people capable of strategic thinking, Professor Ho continued, and students do not have 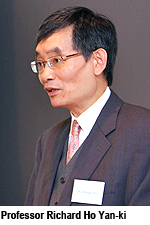 creative thinking skills, as reflected in the way they learn and use language. “Language is the tool for thinking,” he said. “To improve the quality of thinking, we must first improve the quality of our students’ language skills. CityU will soon begin to train all new students to make better use of language. We hope to turn language learning into a part of life that offers discovery and enjoyment,” he said.

Regarding applied research, Professor Ho highlighted one word: impact. He cited CityU’s dimmable light technology and the low-cost test for the early detection of cervical cancer as examples that CityU’s research is close to people and firmly on the ground.

As for the four-year undergraduate curriculum, Professor Ho said the idea of grouping subjects into “constellations” based on integrating various disciplines readily demonstrates the creative thinking skills of CityU scholars.

“We may not be at the top of the pack but we have a clear vision and know where we want to go,” Professor Ho said, expressing a heartfelt wish to Mrs Cha that by the end of her tenure, CityU would be producing creative professionals who can think strategically. “We aim to address 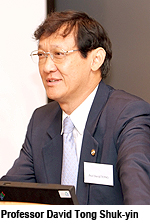 Hong Kong’s strategic needs and ensure that in this fast-changing world CityU students will have secure jobs and a bright future.”

Professor David Tong Shuk-yin, Deputy President, gave an overview of the academic set up at the University, emphasizing the aim to provide the highest quality education; integrating in-class learning with extensive out-of-class engagement and undergraduate research; and the University’s commitment to become internationally competitive in selected areas of research. He then introduced the key features of the University’s faculties and schools.

audience on the development and uniqueness of CityU’s undergraduate education, such as the professionally-oriented programmes at an internationally-competitive level; a sense of added value; strong links with business, industry, professional sectors, employers and the community; and deep collaboration with other higher education institutions.

Under the theme “From Student to Professional”, Professor Lam walked the visitors through the process of transforming students into professionals, from the starting phase to the incubating and nurturing phase to the launching phase when students join the workplace as professionals at an internationally-competitive level.

In addition, Professor Lam talked about CityU’s preparation for the launch

of the four-year curriculum and the outcomes-based teaching and learning principles that underline its development.

“CityU recognizes that knowledge transfer has implications for the levels of international competitiveness in Hong Kong and in the local higher education sector,” said Professor Wong, citing the TeleEye project, a 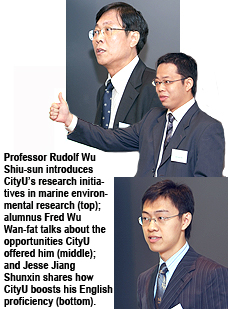 Mrs Cha was then offered a taste of the kind of research and the value-added education at CityU by Professor (Chair) Rudolf Wu Shiu-sun, Department of Biology and Chemistry; Fred Wu Wan-fat, a 2005 graduate of the BSc (Hons) Computer Engineering programme, who now is pursuing an MA Accounting programme; and Jesse Jiang Shunxin, a Year 1 student in the Department of Mathematics.

Professor Wu talked about research at the Centre for Marine Environmental Research and Innovative Technology (MERIT), the onlyArea of Excellence in environmental research funded by the UGC and led by CityU. He quoted examples to illustrate how the University turned new science into new technology to benefit society and how professors make use of research activities to train graduate students. Fred discussed the opportunities that CityU provided to prepare him for a successful career, and Jesse recalled how CityU enabled him to acquire competent English language skills in just two years. 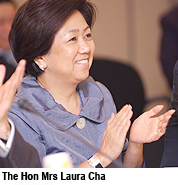 Mrs Cha thanked the CityU community for its reception, saying she was impressed with the presentations. “CityU does excel in applied research and some of the unique areas such as creative media, which is first of its kind in the region. And the quality and practicality of the research are outstanding,” she said. Mrs Cha was also impressed that the 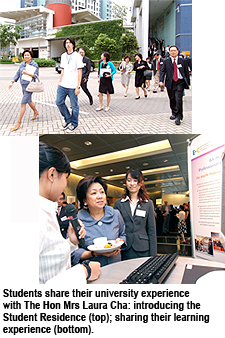 University has placed the four-year undergraduate curriculum high on its agenda.

Mrs Cha is no newcomer to the University. She attended a cultural event on campus in April shortly after she took office, and so she was already familiar with the University campus and its diversified programmes.

Mrs Cha said the future of Hong Kong was rooted deeply in the quality of education. Each of the eight institutions has its own specific characteristics and specialty. “Diversity is the key to our success,” she said. “Not all eight institutions have to do the same thing and you can be excellent in each of your areas.” 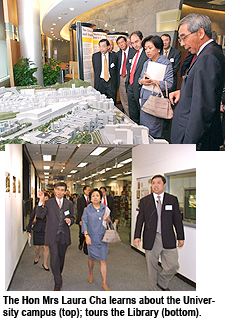 Mrs Cha said she knew a lot of the institutions were not happy with the way that the Research Assessment Exercise had been conducted in the past or the methods with which the quality of research was assessed. She assured attendees that the UGC was aware of these concerns and that it was looking at new methods. As far as she understood, she said, the UGC was unlikely to use the current form to conduct the Research Assessment Exercise again.

Following the meeting, Mrs Cha was treated to tours of the Library, where she learnt about its future plans; and the Student Residence, where she had a glimpse of hostel life.

Please click the following links for full text of the presentation materials: