City University of Hong Kong (CityU) students and alumni excelled in the 2nd City Literary Awards. Four students of the School of Creative Media took first runner-up, second runner-up and two merit awards in the prose category. Two alumni from the Bachelor of Arts (Hons) in Chinese programme won first runner-up in the poetry category and a merit award in the short story category.

A total of 18 talented writers received awards for their outstanding prose, poetry and short stories under the theme of "City in Transition" at a prize presentation ceremony at CityU's Chinese Civilisation Centre on 5 May. 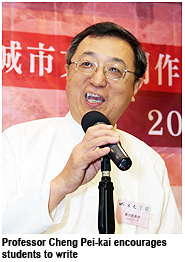 With an objective of encouraging young people in Hong Kong and Macau to develop their writing skills, the Awards organizers seek to boost young people's interest in and appreciation of literature and to promote literary exchange between the two cities. "Writing can expand one’s thinking," said Professor Cheng Pei-kai, Chairman of CityU's Cultural and Sports Committee and Director of the Chinese Civilisation Centre. "Therefore, encouraging young people to write can have a long-term effect on the development of a society."

This year’s Awards expanded beyond tertiary institutions and were opened up to everyone aged 15 to 24 in Hong Kong and Macau. This generated an overwhelming response of 250 entries for the awards, a jump of more than one-third from last year. Among the entries were many outstanding works by young secondary students.

Mr Hon Man-po, Chairman of Literary Arts Group of the Hong Kong Arts Development Council, co-organizer of the Awards, cautioned the award winners at the ceremony that literary writing is not an easy career to pursue. To persist in this career path, one should be mentally prepared to settle for meagre practical gains and loneliness. "Literary writing is in decline," he said. "I hope there will be youngsters who will devote themselves to this career so that literature can continue to flourish."

Ms Lillian Hau, Executive Director of The Robert H N Ho Family Foundation, one of the sponsors of the Awards, expressed appreciation for the efforts of the participants, who managed to produce their works amid the busy life of a high-pressure city. "I hope that winning an award can be an encouragement to motivate you to further develop your writing talent," she told the winners.

Dr Wei said, "I like to encourage students to participate in competitions so that they can learn from the process, study others' works and prove their own writing abilities." Some of Dr Wei's students have won awards in the past. 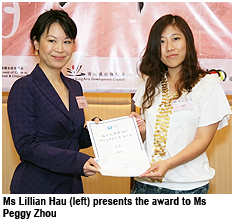 Peggy won her first runner-up award for "The Beijing Story". Her personal experience shows that it is possible to nurture young people's interest and confidence in literary writing through appropriate guidance. She recalled that her primary school teacher of Chinese focused on correction of errors, which made her feel that her essay writing was poor. Her secondary school teacher changed her mind about the study of Chinese language. This teacher asked students to write summaries and commentaries each day on two selected news stories. This regular exercise proved effective over time, and Peggy started to like reading and writing. After reading "The Story of Fei Tu Zhen" by Hong Kong writer Si Si, she thought a lot about the people and things in her hometown of Beijing and how they change through time. Armed with a fountain of thoughts, she finished her essay of over 5,000 characters in just over two hours.

Growing up in Hong Kong's Ap Lei Chau, Patsy developed her passion for Chinese writing at a young age through the guidance of a teacher. She is particularly fond of prose, as she feels that a short passage of prose can be used to express deep feelings and detailed observations. She is grateful to Dr Wei for her guidance in exploring details that she had not paid too much attention to, for example, the different smells along the corridor of her apartment complex and the various aspects of life behind the smells. 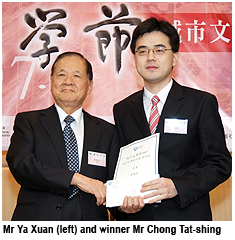 Chong Tat-shing and Carmella Lam Ka-man, graduates of the Department of Chinese, Translation and Linguistics, took first runner-up in the poetry category and a merit award in the short story category respectively. In her winning work "The New Year Eve", Carmella depicted a local university on the New Year Eve to highlight the paradox between necessity and desire. She showed that people pursue their desired items after they have got what they needed, but they despise these items as unnecessary after they have got them. Carmella's previous work "Two Poles" received an encouragement award of the The Third Global Youth Chinese Literature Award for the New Century. She would like to continue to write so that she can "communicate with others and organize her thoughts".

The guests officiating at the award ceremony included Mr Ya Xuen, a renowned poet; Mr Yip Fai, a renowned writer; Professors Zhang Longxi and Wu Hung I, Chair Professors of the Department of Chinese, Translation and Linguistics; and Dr Ma Ka-fai, Assistant Director of the Chinese Civilisation Centre.