City University of Hong Kong (CityU) is working to foster the literary culture of Hong Kong and Macau. To this end, the University has invited a number of prominent writers to judge the City Literary Awards this year.

CityU hopes to encourage more young people to explore their writing talent and interest in literature through this event. The Awards, themed “City Changes”, welcome entries from all students in tertiary institutions in Hong Kong and Macau, and from youngsters aged 15 to 24.

The Awards have received an overwhelming response and the organizing committee has announced that the deadline will be postponed to 26 February to allow entrants to hand in their writings. 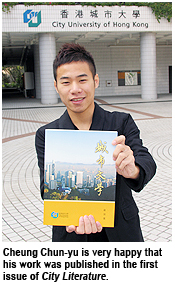 Cheung Chun-yu, a Year 2 student from the Department of Public and Social Administration at CityU, won the prose category last year with Walking on Lo Yan Shan, and he plans to participate this year as well. “I am very happy that CityU is organizing the event again. This is the perfect chance for young literary lovers like me to publish our work,” he said.

This year Cheung Chun-yu will try something new by entering the short story category. “My major is not literature, but literary writing has always been my favorite activity. During my free time, I put down my feelings and thoughts on paper,” he said. As a writer, he is most happy when his readers feel strongly about what they read in his work. His writing was published in the first issue of City Literature last July and on CityU website

All winning entries of the Awards this year will be published in the second issue of City Literature in the middle of the year. There are three top prizes and merit awards for each category. The champion, first runner-up and second runner-up of each category will receive $5,000, $3,000 and $1,000, respectively. The results will be announced in April. The details of this year’s Awards are at: https://www.cityu.edu.hk/ia-ctspc/city_literary07/index.htm. For details, please call 2788 7191.