Staff members, students and alumni from City University of Hong Kong (CityU) and its friends and partners converged at the InterContinental Hong Kong on 29 April to bid farewell to Professor H K Chang, the outgoing President. 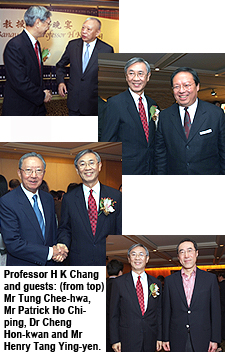 The Farewell Banquet for Professor H K Chang, held under the theme “Time Together”, was jointly organized by CityU and the Community Relations Committee under the University Council and given support by the Council. The event represented CityU’s thanks to Professor Chang for his contributions to the University and higher education in Hong Kong over the past 11 years. It was also an outreach opportunity for the University.

Attending the Banquet were more than 600 guests, including CityU students, alumni and staff members as well as the University’s friends and partners, including Professor Chang’s mentors, friends from school and university, and members of his family. Alumni and Council members gave their full support by sponsoring the evening’s celebrations. 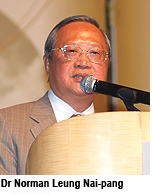 Dr Norman Leung Nai-ping, Pro-Chancellor of CityU and former Chairman of the University Council, began the Banquet with a heart-warming speech in which he recalled how he had first met Professor Chang. He went on to describe how they developed a close working relationship while they served together on the Council starting in 1991. He said that Professor Chang had introduced the 1997-2002 University Strategic Development Plan soon after he was appointed President and had since delivered the targets one after another during his tenure.

Since assuming the Office of President of CityU in May 1996, Professor Chang has led CityU through the transition from polytechnic to university status, making his mark in CityU’s history as, together with students and members of staff, challenges were overcome.

Notable achievements include enriching the education that the University delivers, establishing the English Language Centre to boost English proficiency, and founding the Chinese Civilisation Centre to promote Chinese civilization studies. The University has also put in place an ambiance throughout the University that is favourable to intellectual and personal growth. “With very little money spent, and his talent in art and culture, Professor Chang has turned the campus into a warm, cosy and friendly place of learning,” Dr Leung said.

Dr Leung also said CityU’s inclusion among the world’s top 200 universities was another remarkable achievement under Professor Chang’s leadership. Citing the rankings conducted by the Times Higher Education Supplement as an example, he said CityU had jumped from 198th in 2004 to 154th place in 2006. “It’s even more remarkable because CityU is only 23 years old,” Dr Leung said. “The achievement certainly owes much to the hard work of students and staff, but it would not have been possible without Professor Chang’s visionary leadership.”

On behalf of the University, Dr Leung said “thank you” three times to express his sincere gratitude to Professor Chang. 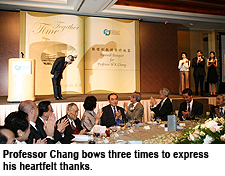 Before Professor Chang addressed the audience, he bowed three times to express his heartfelt thanks for all the encouragement given to him over the years. He said he was grateful to Dr Leung and Mr Chung Shui-ming, the former and present Chairmen of the University Council, as well as to Council members for their support and guidance. He thanked colleagues for their devoted contributions and he thanked students and alumni. He gave special mention to leaders from the community, government officials and, in particular, the University Grants Committee for helping CityU to scale new heights.

“It has been my great privilege to have served the University over the past 11 years,” Professor Chang said. “I leave the University with an enormous sense of satisfaction. It is not about what our colleagues and I together have achieved, but more that we have done our best and that the best is yet to come.” 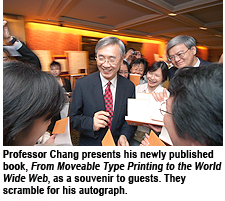 In the sharing session that followed, CityU representatives Professor Anthony Cheung Bing-leung of the Department of Public and Social Administration, Dr Ruth Yee, Associate Director of Student Development Services, and Mr Kelvin Chan and Mr Kelvin Li, both former Presidents of the Students’ Union, shared their experiences working with Professor Chang and extended their good wishes.

Another highlight was a light-hearted video show by the School of Creative Media depicting Professor Chang’s time at CityU, while students, alumni and guests staged a well-received Chinese and Western concert that included a guzheng recital by Professor Xu Lingzi and a suona and saxophone performance by Mr Guo Yazhi.

The climax of the evening was when Mr Chung and Dr Dennis Sun, Chairman of the Community Relations Committee, presented souvenirs to Professor Chang. The special gifts presented by Mr Chung were prepared by members of staff and included a box of well wishes and the Commemorative Book, a collection of Professor Chang’s speeches and letters to students and colleagues from the past 11 years.

“Under Professor Chang’s leadership, CityU has firmly established itself as a university with an international reputation,” Mr Chung said. “Professor Chang has overseen the broadening of the undergraduate curriculum and pioneered students’ exposure to their Chinese heritage. In addition, the University’s reputation in applied research has risen dramatically due to his efforts. He leaves the University with a sure foundation for its future success and a valuable opportunity for the next stage of our development.” 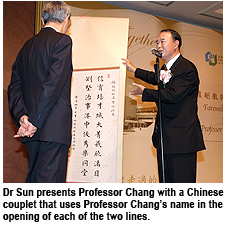 CityU has nurtured a wealth of young talent and brought together top-notch people from Hong Kong and the mainland (信實培才城大菁義欣滿目，剛堅治事港中俊秀樂同堂), prompting Dr Sun to say, as he looked upon the audience of colleagues, alumni and students, “CityU is a big united family. We are all for one and one for all.”